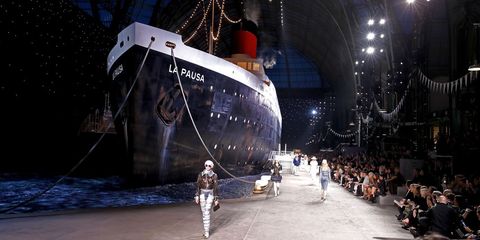 When it comes to runway shows, Chanel knows how to pull out all the stops. So it should hardly come as a surprise that Thursday, for its Cruise 2019 show in Paris, the fashion house brought an actual cruise ship onto its runway.

The larger-than-life liner, named 'La Pausa' after Gabrielle Chanel's summer house on the French Riviera, served as the ultimate backdrop to the fashion house's nautical-inspired collection.

The CHANEL liner ‘La Pausa’, named after Gabrielle Chanel’s summer house on the French Riviera, provides the backdrop to the #CHANELCruise 2018/19 show at the Grand Palais in Paris.

After models boarded the Chanel-branded ship alongside Karl Lagerfeld for the grand finale, the ship then opened up to guests, making for the ultimate photo op.

As for the collection itself, there were plenty of white and navy stripes, berets, and straw hats perfect for your next getaway on the French Riviera. There was also, of course, no shortage of Chanel's signature tweed in the form of skirt suits and dresses. Perhaps most striking, however, was the fact that nearly every look was worn with a pair of white tights—an item that's been passé in the fashion world for quite some time now.

Bella Hadid hit the runway in a blue two-piece set accessorized with a tweed beret and pearl belt.

Stella Maxwell, Adut Akech, Gigi, and Bella Hadid were amongst some of the models who walked the show. Chanel regulars including Kristen Stewart—who wore a black sparkling tuxedo dress— and Lily-Rose Depp were amongst those sitting in the front row.

This, of course, is hardly the first time Chanel went big with the set of its runway show. In the past, the fashion house has transformed its runway set into a space station, supermarket, airport, carousel, and more.

Lauren Alexis Fisher Market Editor Lauren Alexis Fisher is Harper's BAZAAR.com's market editor.
Advertisement - Continue Reading Below
More From Fashion
Stock Up on Cute, Flirty Summer Dresses
Cartier Women's Initiative Announces Its Finalists
Advertisement - Continue Reading Below
What Marie Claire Editors Wore to Get Their Jobs
Is the Next Big Wedding Trend Reversible Gowns?
Our Favorite Throwback "It-Bags"
What to Buy at Nordstrom's Spring Sale
The Best New Spring Shoes to Treat Yourself To
We Found the Best Modest Swimsuits for Summer
Fashion Comes Together to Fight Coronavirus
Your Official Guide to the Royal Family's Tiaras