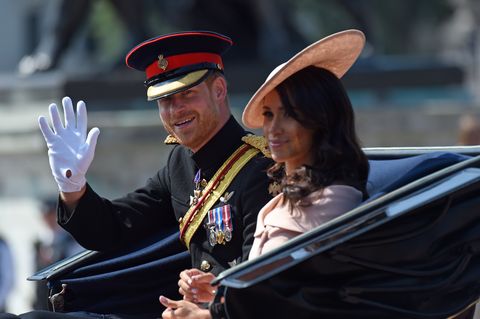 We all know Meghan Markle's stylist is her BFF Jessica Mulroney (her children were even bridesmaids and pageboys at Meghan's wedding). But, there might be an even more influential player in who shapes Meghan's style and his name is—wait for it—Prince Harry.

According to The Daily Mail, the Duke of Sussex has been giving advice to his wife about her royal engagement outfits and "Meghan is always asking Harry's opinion." The unnamed source reports that Prince Harry "gives his views on what he thinks looks best, rather than helping her follow royal protocol on hemlines or anything like that. The joke is that Harry is Meghan's surprise stylist."

This idea isn't too far-fetched, given that Prince Harry is more than familiar with the royal dress protocols and he, personally, has stepped up his own fashion game. He reportedly hired Kate Middleton's stylist Natasha Archer to overhaul his wardrobe a few years ago, so you know Prince Harry has some tips and tricks up his sleeves.

The Daily Mail is even claiming "Stella McCartney is working on a few more outfits for Meghan," and that "Prince Harry attends the design meetings and fittings to give his opinions on the looks." If that's true, we'll wait for these said creations to debut. And in the meantime, I'm looking back on some outfits Prince Harry might have had a role in picking and the thoughts he had once he saw Meghan in them.

“These photographers are going mad for your ring!"

"A fascinator looks good on you, dear."

"Your outfit looks beautiful in the sunlight."

"Do you think the press will notice us twinning in navy?"

"Pink is definitely your color."

Getty Images
Related Stories
Shop Every One of Meghan Markle's Best Looks
Meghan Markle and Prince Harry's Honeymoon
Harry and Meghan Want to Have Kids Very Soon
This content is created and maintained by a third party, and imported onto this page to help users provide their email addresses. You may be able to find more information about this and similar content at piano.io
Advertisement - Continue Reading Below
More From The Ultimate Guide to the Royal Family
Princess Beatrice Has Given Birth to a Baby Girl
How Meghan & Harry Spent Their 2-Year Anniversary
Advertisement - Continue Reading Below
Charlotte Has Two Major Milestones Coming Up
Kate Made a Very Common Shoe Shopping Mistake
The Queen Is Lawyering Up, Apparently
Harry & Meghan Are Still Close to the Queen, TYVM
Archie Inspired Harry and Meghan to Take a Stand
Harry & Meghan Had a Hard Time Leaving Royal Life
See Will & Kate's Note About Prince Philip's Death
Kate Refused to Let George Pet a Marsupial in 2014