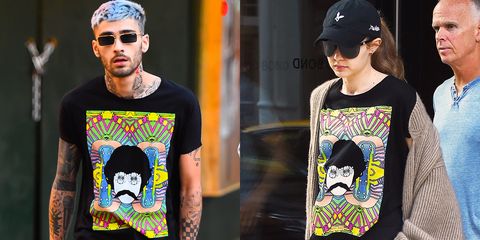 Zayn Malik is kind of hard to miss in public. Aside from the fact he's, well, insanely famous, his newly dyed silver-blue hair will also catch everyone's attention. Or, at least mine when the singer stepped out in New York City on Thursday. Malik dressed in a graphic Wrangler x Peter Max tee, gray slacks, and bright blue Nike sneakers.

The look was "so" Zayn, or so I thought, when it turned out he actually borrowed the tee from his girlfriend. Hadid first wore the Wrangler tee on June 1, and Malik happened to wear it only a few weeks later. The singer also wore Roxanne Assoulin bracelets, one of which is a custom design that Hadid created for him.

The two are known for borrowing each other's clothes. In their joint August 2017 Vogue cover, the couple admitted when it comes to fashion, they don't follow society's gender rules on what they can and can't wear.

"What was that T-shirt I borrowed the other day," Malik asked Hadid in the issue. She responded that it was Anna Sui and Malik said, "I like that shirt. And if it’s tight on me, so what? It doesn’t matter if it was made for a girl."

Hadid echoed his sentiments with, "Totally. It’s not about gender. It’s about, like, shapes. And what feels good on you that day. And anyway, it’s fun to experiment."

Malik and Hadid are a modern couple rewriting the rules for themselves and their relationship. (The duo recently rekindled their romance and left a trail of love clues for fans to follow.) Though, their exact tee is sold out, I found similar ones below that you can share with your SO. 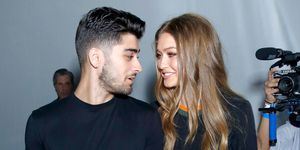 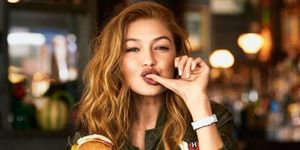 7 Foods Gigi Hadid Loves to Eat
This content is created and maintained by a third party, and imported onto this page to help users provide their email addresses. You may be able to find more information about this and similar content at piano.io
Advertisement - Continue Reading Below
More From Fashion
Black-Owned Shoe Brands You'll Fall In Love With
The Best Black Jeans to Build Your Outfit Around
Advertisement - Continue Reading Below
Our Favorite Summertime Pajamas
The Dreamiest Tie-Dye Swimwear for Summer 2021
Embrace In-Between Season With a Trench Coat
Comfy and Stylish Sandals to Walk a Mile In
The 26 Best Leggings, Based on Ratings and Reviews
Your Guide to Spring 2021's Wardrobe Essentials
A Sleek Coat Is Chloe Gosselin's Power Pick
Inspiring Mother-Daughter Owned Brands