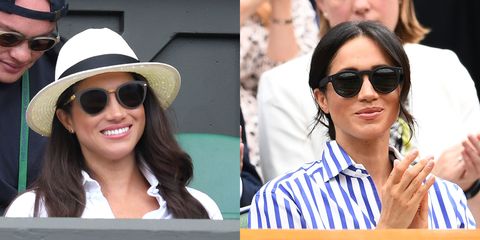 A lot has changed for Meghan Markle since her wedding to Prince Harry. She's traded in her acting career for the life of a full-time royal and now has to adhere to some strict rules when it comes to fashion and etiquette. She's also quickly become an international style icon.

Meghan also attended Wimbledon in June 2016, just a month before she and Harry were set up by a mutual friend. This means, we have a perfect comparison on our hands: How Meghan dressed for the same event just before meeting Harry and just after marrying him.

In 2016, Meghan wore almost all white to Wimbledon, from her hat to her shirt and pants and even her bag.

Here's what Meghan is wearing at Wimbledon today:

This year, Meghan is wearing a blue and white striped top by Ralph Lauren and white pants. One the face of it, maybe it seems like she's changing things up, but overall, her pre- and post-royal wedding Wimbledon looks are remarkably similar. Both years, Meghan opted for a simple, classic button down shirt and plain white pants. Both years also saw her in nearly-identical sunglasses.

The differences are fairly insignificant—sure, she's not wearing a hat this year and she opted for her signature low, messy bun instead of wearing her hair down like she did in 2016, but the overall looks are basically the same. The biggest change, of course, is that this year she was able to accessorize with her equally-stylish sister-in-law.

This content is created and maintained by a third party, and imported onto this page to help users provide their email addresses. You may be able to find more information about this and similar content at piano.io
Advertisement - Continue Reading Below
More From Royal Family Fashion Guide
For Prince George Turning 8 Is a Fashion Milestone
Meghan's Sunglasses Are On Sale for Prime Day
Advertisement - Continue Reading Below
The Meaning Behind the Royal Family Member's Names
Meghan Wore a Meaningful Necklace for Vax Live
Meghan Markle Wore Carolina Herrera for Vax Live
Kate Middleton's Nod to Diana at Philip's Funeral
The Most Genius Royal Fashion Hacks of All Time
Pippa Middleton Goes for Stylish Stroll In London
Meghan Markle Wears Armani for Her Oprah Interview
Shop Meghan's Stunning $30 Summer Dress