Just when you’d started to recover from seeing Rihanna dressed as the Pope, Ariana Grande representing the Sistine Chapel, and Jared Leto rocking up as Jesus himself, talk of next year’s Met Gala has already begun. Details of next year’s lavish evening have been announced by the Metropolitan Museum of Art, and it sounds like it could just be the biggest and most suitably over-the-top fashion event of all time. The 2019 costume exhibition and gala has been given the mouthwateringly extravagant theme of "Camp: Notes on Fashion," and the chosen celebrity hosts are the perfect match.

Put away all thoughts of Girl Scout-inspired looks and campfire-ready ensembles. For the Met Gala 2019, camp refers instead to exaggerated fashion and, as The New York Times explains, the exhibition will take inspiration from Susan Sontag's 1964 essay, in which she defines all things camp as the "love of the unnatural: of artifice and exaggeration."

Andrew Bolton, Costume Institute curator, explained exactly why the choice in theme is so apt for the time. "We are going through an extreme camp moment,” Bolton said. “It felt very relevant to the cultural conversation to look at what is often dismissed as empty frivolity but can be actually a very sophisticated and powerful political tool, especially for marginalized cultures. Whether it’s pop camp, queer camp, high camp or political camp – Trump is a very camp figure – I think it’s very timely.”

With this in mind, the selection of A-list hosts for the evening’s spectacle couldn’t be more perfect. As Queen of the sartorial risk, Lady Gaga will take the reigns for the night alongside Harry Styles, also well-known for his love of flamboyancy and pushing the boundaries of typical menswear and gender through clothing.

The pair will be joined by tennis star Serena Williams, who’s also been dipping her toes into the world of fashion this year, as well as Gucci creative director, Alessandra Michele.

As well as the annual, show-stopping red carpet showcase, the actual exhibition itself will feature 175 pieces in the show across both men's and women’s fashion. Split into two sections, the first will address the origins of camp, and the second will examine how contemporary designers use this irony and exaggeration in their collections.

Sponsored by Gucci, the 2019 Met Gala will take place on Monday 6 May. Phew, just enough time for you to plan your costume. 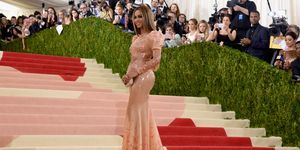 The 105 Best Met Gala Moments Ever
Lucy Wood Contributor Lucy Wood spends most of her time writing about celebby things, reading books, and waiting for the glorious day that she have enough millions for a pet sloth.
Advertisement - Continue Reading Below
More From Fashion
Rihanna's Go-to Airport Look: Heels and Sweats
Kate Middleton's Eternity Ring Is Back In Stock
Advertisement - Continue Reading Below
The Net-a-Porter Sale Section Is Very Good
Meghan Markle Wears Necklace of Archie's Star Sign
Black Turtleneck Outfits to Pin to Your Mood Board
Everlane's New Leggings Already Have a Waitlist
Hot Date Night Outfits for the Cold
Found: A Cute Winter Jacket That's Under $60
Better Pack Some Shell Jewelry for Your Next Vacay
Delightful Dresses for a Springtime Wedding