On Tuesday, House Minority Leader Nancy Pelosi and Senate Minority Leader Chuck Schumer visited the White House to discuss the border wall issue with President Donald Trump. The televised conversation quickly became heated, the discussion ended without a compromise, and the president threatened to shut down the government if his long-proposed demands for a wall aren't met.

While the debate had people fired up on Twitter, that wasn't the only thing that caught people's attention. As Pelosi left the White House, Twitter users immediately zoomed in on the sight of her red coat and became obsessed with the outerwear.

The coat went viral, spawning memes and drawings and a Twitter account called "Nancy Pelosi's Red Coat" while The Boston Globe effectively named it Big Coat Energy (a play on BDE from earlier this year).

Pelosi's daughter, Christine Pelosi, even picked up on the momentum of the situation and gave a recount of when her mom purchased the coat, writing, "This makes me smile: I remember shopping with Nancy Pelosi aka Mom for this coat at Christmastime 2012 for President Obama’s second inaugural. (The reports say it’s red but expect a dark orange.)"

The Max Mara design is from the label's fall/winter 2012 collection and though it's sold out, thanks to the fervor the outerwear caused, the brand told Glamour that they're bringing it back next year. Whether you decide to get Pelosi's dark orange/red version or purchase the outerwear in a completely different color way in 2019, just know this: It's a total power woman coat.

In the meantime, console yourself and shop these similar red outerwear selections. 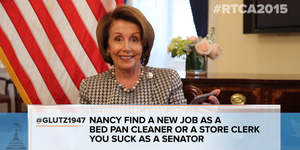 Nancy Pelosi Reads Mean Tweets About Herself
This content is created and maintained by a third party, and imported onto this page to help users provide their email addresses. You may be able to find more information about this and similar content at piano.io
Advertisement - Continue Reading Below
More From Fashion
Why I'm Obsessed With Longchamp's Greenest Travel
Functional—and Fashionable—Snow Boots
Advertisement - Continue Reading Below
The Biggest Spring Jewelry Trends From the Runways
The Best Pairs of Flared Jeans to Invest In
Chloé Just Became B Corp Certified
The Winter Trends to Start Investing In Now
Spring/Summer '22 Shoe Trends From the Runways
Halloween Costumes You'll See Everywhere This Year
Embrace In-Between Season With a Trench Coat
The Boots Brands Fashion Girls Are Obsessed With