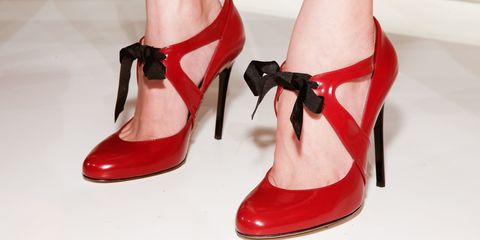 Don't call it a comeback...she's been here for years.

After departing her eponymous label in 2006, Kate Spade—yes, the designer herself—will be returning to the industry with an accessories collection, according to WWD. Hitting shelves during the holiday season, the line will feature mostly shoes, but handbags as well. (Victory!)

"I've spent the last eight years raising my daughter and being a consumer," Spade told WWD. "It's exciting to be back at work."

As of right now, there's not much more intel about the collection, but here's one interesting tidbit: It definitely won't include her own name, due to the legal restrictions following the sale of her brand to Liz Claiborne. A spokesperson has said that two possible alternate names are being considered.

Whatever it's called, we're into it.

Getty Images
This content is created and maintained by a third party, and imported onto this page to help users provide their email addresses. You may be able to find more information about this and similar content at piano.io
Advertisement - Continue Reading Below
More From Fashion
The Top Fall 2021 Handbag Trends
Refreshing Ways to Style a Cardigan
Advertisement - Continue Reading Below
The Foolproof Guide to Cleaning Your Jewelry
Nordstrom's 2021 Anniversary Sale Is the Best Yet
Hats That Will Make a Statement—In a Good Way
The Most Exciting Jewelry Trends for Fall 2021
Maxi Dresses That Work for Every Occassion
The 100 Best Shopping Sites to Browse Through
The Perfect Vests for Layering
How to Make White Sneakers Look Brand New