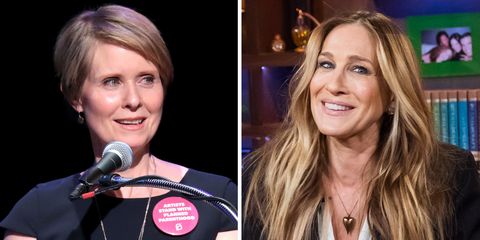 2018 has already seen a lot of Sex and the City 3 drama between Kim Cattrall and her former co-stars (who were definitely not friends, just colleagues, apparently). And now, Sarah Jessica Parker has weighed in on Cynthia Nixon's run for Governor of New York, and her initial statement is a bit strange.

Charlotte York herself, Kristin Davis, fully supports Nixon's campaign, writing on Instagram, "@cynthiaenixon is stepping up to run for Governor of NY. I am thrilled to support her and I know that she cares deeply about the issues facing all of us. I’m so proud of her and I know she will work tirelessly to create change for all who need representation."

And even Cattrall, despite her differences with the cast, appeared to support Nixon's new role, by tweeting, "I support & respect any former colleague’s right to make their own career choices."

However, Parker initially told Page Six, "Cynthia has been my friend and colleague since we were little girls. I look forward to talking to her about her New York state gubernatorial bid."

But on Thursday, Parker shared a message of wholehearted support on Instagram, endorsing her "sister on and off screen" in her run:

The former Sex and the City star announced that she was running for governor of New York earlier in March, when she posted an emotive campaign video. Of her run, Nixon said:

"New York is my home. I've never lived anywhere else. When I grew up here, it was just my mom and me in a fifth-floor walk-up....We are now the most unequal state in the entire country with both incredible wealth and extreme poverty....I've never wanted to live anywhere else, but something has to change.

Related Story
Kim Cattrall Responds to SJP's 'SATC3' Comments
Amy Mackelden Amy Mackelden is a freelance writer, editor, and disability activist.
This content is created and maintained by a third party, and imported onto this page to help users provide their email addresses. You may be able to find more information about this and similar content at piano.io
Advertisement - Continue Reading Below
More From Politics
Senator Hirono on Her New Memoir 'Heart of Fire'
How to Demand Justice for Adam Toledo
Advertisement - Continue Reading Below
Daunte Wright's Death Sparks Protest in Minnesota
41 Surprising Rules First Ladies Have to Follow
Asian American Women on Where to Go From Here
Syrian Journalists Reflect on a Decade of War
How to Show Your Support for the AAPI Community
Activist Lydia X. Z. Brown on Disability Justice
Elisa Crespo: "I'm Not Here to Make History"
What We Know About the Georgia Spa Shootings