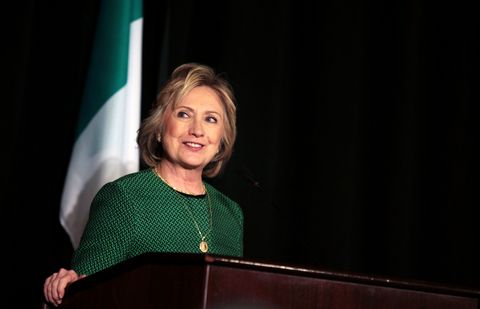 Update, 4/12: After two years of will-she-or-won't-she-or-she-definitely-will-but-when speculation, Hillary Clinton is officially in the race for the 2016 Presidential election.

Though...she didn't enter that race quite the way we'd imagined. Reporters had been expecting an official message (and video) from Clinton herself—but instead, word spread through an email from campaign chairman John Podesta, in which he says to potential future donors: "I wanted to make sure you heard it from me - it's official: Hillary's running for president."

I'm running for president. Everyday Americans need a champion, and I want to be that champion. –H https://t.co/w8Hoe1pbtC

And the launch of her official campaign site, featuring this announcement video:

The announcement of this long-awaited campaign means the former Secretary of State can finally start pushing her platform, which is expected to prominently feature women's issues—good timing with Tuesday's National Equal Pay Day, since the wage gap is thought to be one of the major challenges Clinton will tackle.

She's hitting the ground running with events in New Hampshire and Iowa, and we can expect a flurry of campaign news from there.

According to the New York Times, this could be one of the most expensive campaigns ever, with supporters and PACs hoping to raise $2.5 billion to get the job done. It's also likely to be one of the buzziest—and most progressive.

Original post, 4/10: Surprise internet drops: They're not just for the Youngs/Beyoncé. Hillary Clinton will apparently announce her 2016 presidential bid Sunday with a video on social media.

According to CNN, Clinton has already filmed the announcement, which is now being edited before it is deployed online midday April 12. After the video's release, Clinton will immediately begin campaigning, likely stopping in Iowa first in advance of the caucuses.

IT'S FINALLY HAPPENING, GUYS. Will Bill make an appearance? (We all know he's going to shine as the First Gentleman.) Will baby Charlotte? I'm not super into the thought of Hillary trying to appeal to the people by "softening her image," as the co-chair of her 2008 campaign said, but whatever—this will be an interesting ride.