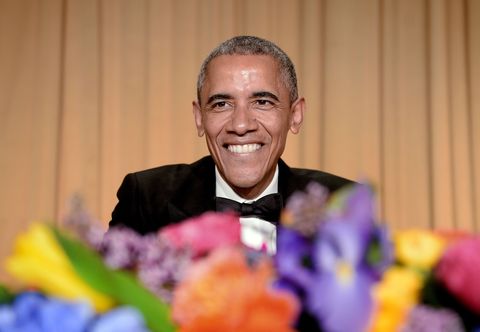 President Obama tugged at our feminist heartstrings while delivering a campaign speech on Tuesday night, during which he asked men to "look inside themselves" and confront their own sexism before casting a ballot.

"I just want to say, to the guys out there, I want to be honest," Obama said. "You know, there's a reason we haven't had a woman president before...I know that my wife is not just my equal but my superior...I want every man out there who's voting to kinda look inside yourself and ask yourself, if you're having problems with this stuff, how much of it is that we're just not used to it? When a guy is ambitious, and out in the public arena, and working hard, well that's okay. But when a woman suddenly does it, suddenly you're all like, well, why's she doing that?"

Ummm...this. Gender bias is an issue most women in this country have experienced firsthand, and the fact that our president is up on a stage casting a spotlight on it is so important and justified. But wait, Obama has more real talk to impart:

Ahem, wonder who he's talking about...

Mehera Bonner Contributor Mehera Bonner is a news writer who focuses on celebrities and royals.
This content is created and maintained by a third party, and imported onto this page to help users provide their email addresses. You may be able to find more information about this and similar content at piano.io
Advertisement - Continue Reading Below
More From Politics
Report Finds Andrew Cuomo Sexually Harassed Women
Gwen Berry: Athlete, Activist, Olympian
Advertisement - Continue Reading Below
The Anti-Choice Endgame: Power And Control
Give Domestic Workers the Protections They Deserve
Kristin Urquiza Wants Justice for COVID-19 Victims
A Breakdown of VP Harris's Net Worth
WH Announces Removal of the Hyde Amendment
What Liberation Means This Juneteenth
Kathryn Garcia: It's Time to Step Up or Shut Up
A Valedictorian Speaks Out Against Abortion Bans