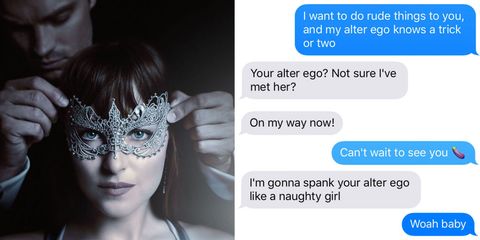 I decided to find out. And I asked seven of my friends to give it a try, too. Here's how our guys reacted.

1. Ami and Aaron have been married for 9 years.

"At first it seemed like he might be a little into it, but then he just got really confused. After the third line, he started freaking out and even called me to see if I was OK or if someone had stolen my phone."

2. Christina and Andrew have been married for 8 months.

"This was actually a lot of fun. I think Andrew was pretty surprised at first, but he was game to play along — perhaps it's one of the perks of being newly married. (We haven't had our public ceremony and party yet, hence the vow talk.) He definitely Googled one of the lines though, so he knew what I was up to."

3. Jackie and Chris have been married for 3 years.

"Well, that didn't last long. The 'so hot, so cold' line is also a Fifty Shades line, so he caught on right away to what I was doing. I'm not sure if I should be impressed or scared by the fact that he knew."

4. Sam and Dustin have been married for 1 year.

"Dustin and I had been texting all morning about buying last-minute Christmas gifts, and since his birthday is two days after, I realized that was my perfect segue. I started with the birthday text and he completely ran with that idea for awhile, not even focusing on the sexy parts of the other messages. He just thought I was trying to distract him from figuring out what his gift was the whole time."

5. Liz and Joe have been married for 5 years.

"I decided to text Joe while he was out for a friend's birthday, and after a few lines he literally put his phone on silent! He didn't bring it up the next day, but when I did he just said, 'Um, I wasn't impressed. Where were you watching that?'"

6. Kayleigh and Kenny have been married for 2 years.

"I feel like Kenny's responses sum up how this experiment went pretty well. He thinks I'm crazy, high on acid, or need Jesus (maybe all three). Guess Fifty Shades just doesn't do it for him."

7. Raquel and Neville have been married for 3 years.

"I texted Neville while he was away on a work trip for the week, because there's no way I'd be able to do it with him home. He was super confused the entire time and thought someone had taken my phone, but at least he had some fun with it. I'd probably correct my grammar, too."

8. Katie and Tristan have been married for 3 years.

"After the second quote, Tristan figured something was up, so he Googled the quote and starting sending phrases back to me. The 'I'm breathing now' is because in the book it says Christian Grey starts breathing heavily."