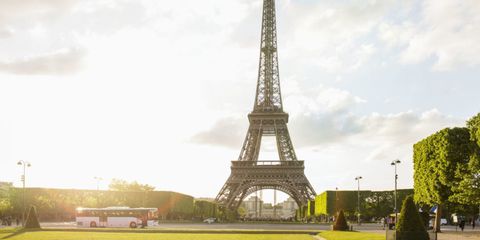 If you constantly update your "Wanderlust" Pinterest board with shots of Buckingham Palace or the Eiffel Tower, get excited: Hopping on a plane to Europe just got way more affordable. A European budget airline just announced new flights from the East Coast to France and the United Kingdom, and the fares are insanely cheap.

According to a press release, Denmark-based airline Primera Air will fly from Newark and Boston to London's Stansted airport, Birmingham's airport, and Paris's Charles de Gaulle airport. Those flights will start in April 2018 and two more transatlantic routes will be announced by the end of this summer. Primera Air's website advertises flights starting at $99 to all three destinations.

But keep in mind you get what you pay for, so these flights are pretty bare-bones. The planes have two classes, Premium and Economy, and the Economy tickets are the ones that start at $99. And this is the type of airline that makes you pay extra for basically everything, including checked bags, priority seating, and even meals. But even the bare-bones tickets give you outlets to charge your devices, so if you pack light, bring a meal, and load up your tablet with lots of books and movies, you can get by without paying too much on top of your fare.

Tickets started to go on sale July 20, so if you want to take a cheap trip to Europe next year, you should get on it—these won't last long.

This content is created and maintained by a third party, and imported onto this page to help users provide their email addresses. You may be able to find more information about this and similar content at piano.io
Advertisement - Continue Reading Below
More From Travel
The Most Beautiful National Parks in the U.S.
8 Summer Vacation Spots That Are Calling Your Name
Advertisement - Continue Reading Below
5 Wellness Vacations That Aren't Wellness Retreats
6 Fun Trips to Take With Your Best Friend
Created for From Marie Claire for Created by Marie Claire for
Chase Bank
The Most Gorgeous and Useful Luggage Sets
Celebrity Vacation Spots The Year You Were Born
Add St. Lucia to Your Post-COVID Bucket List
What to Buy From Away's Second-Ever Sale
Explore the Luxe Private Island of Cayo Espanto
Andros Is the Most Underrated Spot in the Bahamas