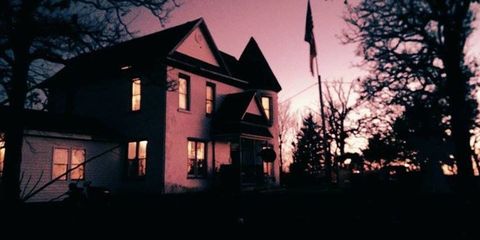 Why go to a haunted house when you can *sleep* in one? That's the question I pose to you as you peruse this list of the most haunted hotels in the country. Halloween field trip, anyone?

Located in St. Francisville, Louisiana, this plantation is said to be one of the most haunted properties in America. More than 12 ghosts are said to roam the plantation, including the most famous: "Chloe," who wears a green turban and was a former slave.

The Stanley Hotel in Estes Park, Colorado is the very spot that inspired Stephen King to write The Shining, so, you know, it's definitely spooky. The hotel has been reporting paranormal activity since the 1970s, with many believing the original owners roam the halls, sometimes even playing the piano. The resort now features a ghost tour.

Located in Eureka Springs, Arkansas, "America's most haunted hotel" is over 130 years old and has served, over the course of its life, as a women's college and a hospital—run by Norman Baker, a con artist who claimed to be a doctor with the cure for cancer...except that he tortured patients instead.

This Santa Fe hotel was built in 1922, but former fondas—or inns—have been on the site since the 1600s. While many weird occurrences and ghosts have been reported, the most notable is the Honorable John P. Slough, Chief Justice of the Territorial Supreme Court, who was shot in the lobby in 1867.

This hotel in Coral Gables, Florida has gone through many iterations—starting in the '20s, when it was *the* place to be—and a favorite of some high-profile mobsters. In the '40s, it was shut down to become a hospital to treat wounded soldiers, and in the '70s it was left in a state of disrepair. Now, it's regained its status as a luxury hotel, but not without some guests who just won't check out…including Thomas "Fatty" Walsh, a gangster who was killed in the hotel over a gambling debt in 1929.

Anyone looking for a ghost encounter in this 1722 Colonial tavern in New Hope, Pennsylvania should book room 6, known as "Emily's Room." The mother of the former owner can often be heard crying, with her soft lavender perfume lingering in the air.

If you're heading to New Orleans, there's a good chance your hotel has a ghost story (or five). But the two-story Hotel Provincial has many, *many* ghost stories to tell—it acted as a hospital for wounded Confederate soldiers during the Civil War, and guest upon guest have come forward to say they've seen solders, doctors, and even pools of blood that disappear. Creepy.

This D.C. hotel was built in 1930 and has a haunted suite, aptly named "The Ghost Suite." The story is this: The two-bedroom apartment suite is haunted by the spirits of the original owner, his daughter, and their housekeeper. The daughter and housekeeper both died in the suite—and strange noises, lights being turned on and off, and the feeling of someone running by have all been reported.

Bonus: You Can Also Book a Haunted Airbnb

Try staying at one of the most haunted homes in the Midwest (a 169-year-old Victorian that was once used as a funeral home and hospital, among other things), or a haunted bedroom in New Orleans (hello, small child…), or a 1799 Savannah cottage that's on the trail of ghost tours—for good reason.

Samantha Leal Senior Web Editor I'm Sam, the senior editor at MarieClaire.com.
This content is created and maintained by a third party, and imported onto this page to help users provide their email addresses. You may be able to find more information about this and similar content at piano.io
Advertisement - Continue Reading Below
More From Travel
Add St. Lucia to Your Post-COVID Bucket List
What to Buy From Away's Second-Ever Sale
Advertisement - Continue Reading Below
Explore the Luxe Private Island of Cayo Espanto
Andros Is the Most Underrated Spot in the Bahamas
The Most Covetable Weekender Bags Out There
Intl. Resorts That Offer On-Site COVID-19 Testing
Magical Ski Destinations for a Safe Winter Getaway
No Clue Where to Go in Turks & Caicos? Start Here
I'm Afraid to Travel by Myself in My Own Country
Over Cabo? Head to Punta de Mita, Mexico, Instead