Look, we know your Pinterest is full of travel quotes and maps, you've saved every pretty travel photo on Instagram (thanks new feature!), and your resolutions list included "travel more," so why not actually do something about that this year? Here, the top places to visit in 2017, according to the foremost travel experts AKA Expedia, Kayak, and Booking.com. Do it for the experience.

Cartagena and Medellin specifically are poised to be the hot spots for the new year, making Kayak's trending destinations list. With recent reports of lower crime and a lessened fear of Zika, Colombia is primed and ready to make a comeback as it was already climbing in popularity in 2015 and 2016. And with hotel growth at an all-time high and a international visitor rate growth of 12.9 percent over the past five years, it's time to break out that Spanish app and book a flight.

While certain elected officials might think otherwise, Mexico is a beautiful and diverse place—and Mexico City is one of the most cosmopolitan cities to visit. And you don't have to take my word for it. According to Expedia, it's one of the trending destinations for this year. Go grab some street tacos or dine at some of the best restaurants you'll go to (like, ever), visit the Frida Kahlo museum, and take a stroll in Chapultepec Park.

Portugal is pretty much on everyone's list for this year, and it's not surprise why. Dubbed the New Iceland (as the meteoric rise of the destination was no joke for 2016), the country's ready to welcome more visitors. With U.S. travel to Portugal increasing 22 percent in the last 12 months, many are already flocking. Lisbon is one of the most popular cities, while Algarve (Portugal's coastal region), Porto (the busy city world famous for port wine), and Sintra (a day trip away from Lisbon and home to castles and villas) also make spectacular stops.

The hottest destination for 2016 shows no sign of slowing down. With commercial flights available for the first time in 50 years, Cuba is on fire. Specifically, Havana searches skyrocketed with a 191% increase over the past year, according to Kayak. If you haven't added it to your list, now is very much the time.

The Virgin Islands are celebrating their 100 year anniversary of becoming a U.S. territory, and the tourism board is giving those visiting money to play with. Yes, seriously. Every visitor this year will received $300 to spend on historical or cultural tours and activities, including kayaking and hiking.

Canada is celebrating its 150th anniversary this

year, and pretty much every major Canadian city is on the in-the-know

traveler's radar, including Montreal, Quebec, and Toronto. But Banff may just

top the list. The idyllic city is one of the top 5 best international

destinations for 2017 according to Booking.com. A resort town in Alberta, the

a getaway (and some definite Likes).

According to Expedia, non-stops to India from the U.S. (yes, truly) are up—meaning there's a definite market for travelers headed to the continent. And, thankfully, domestic flights between cities are also up—meaning you can more easily get around should you want to make multiple stops. The top cities? Mumbai, Goa, Agra, and Darjeeling top our picks.

The hot spot continues to grow in 2017, so it's time to request that time off if you haven't already. According to Expedia, the Middle Eastern city experienced double-digit growth in capacity just last year, and the city is enjoying another six percent increase already this year. While connecting flights factor into this surge in popularity, the bustling city has attracted many thanks to its luxury shopping and fun nightlife—and has officially gotten the celeb seal of approval thanks to Selena Gomez, Gigi Hadid, JLo, Drake, the Kardashians, and many more.

Next
8 Ski Resorts for People Who Hate Skiing 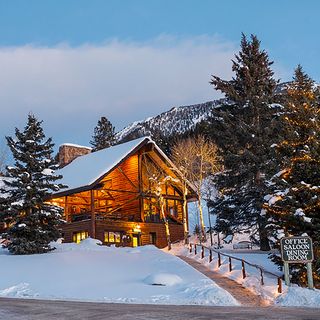