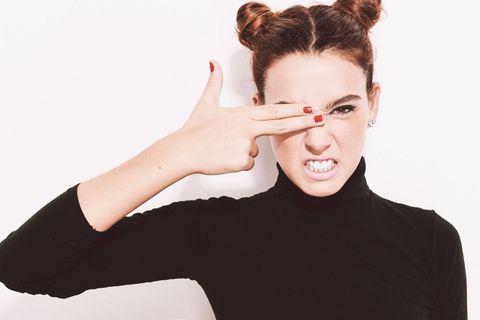 If you're even the slightest bit acne-prone like I am, you know how daunting it can be to test a new product. "Is that underground bump from my period, or because I tried a new moisturizer?" "Are those whiteheads because I drank four margaritas last night, or because of that new highlighter?" And the best, most-fun part about it all is that you'll never truly really know for sure—that is, until now. 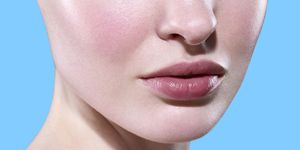 Because to finally put an end the frantic mental cycle that is acne, I chatted with dermatologist Mona Gohara, resident acne expert (a title that's partially thanks of her Harvard training, but mainly thanks to my frantic 2 a.m. emails about mystery bumps on my skin) and asked her to help us figure out, once and for all, whether or not that new product is wreaking havoc on your angelic little face.

It's tempting—and easier—to blame your zits on new products, but skin breaks out for a zillion reasons, including environmental factors, stress, hormonal changes, diet, anxiety, genetics, and, yes, even a new beauty routine, says Gohara.

So if you recently broke up with your S.O. and have been shoveling chocolate into your sleep-deprived gullet for a week, oh, and you also started a new face cream, "look toward the most obvious explanation, first, and try your new product again in a few weeks, when your system has calmed down," she says.

And I don't mean normal as in how the American Girl puberty book depicted standard cartoon zits. Do they look normal for you? "Everyone knows their personal type of zit," says Gohara, "and you know if you're prone to tiny whiteheads on your forehead or cystic zits on your jawline."

Which means you also know what's abnormal for your face, like, a giant zit on your cheekbone, or a rough, red, scaly patch across your chin. "If it's something you really rarely ever see on your skin, especially in places you never break out in, then a new product could very likely be the culprit," she says. 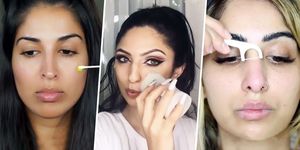 Do *Not* Try These 5 Viral Beauty Hacks at Home
So does that mean you should immediately throw away your fancy new face cream or bronzer? "If you're consistently using a new product and consistently seeing new breakouts over the course of a week or two, then stop using it," says Gohara. "As a rule of thumb, if a product burns, itches, causes flaking, or breaks you out, it's not agreeing with your skin, and you need to cut it out of your routine."

Of course, there are exceptions to every rule, and I'm about to throw you a big one...

"Actives are a category of products that contain active ingredients, like benzoyl peroxide, retinoids, salicylic acid BHAs, and vitamins C and E, all of which directly effect changes in your skin," says Gohara. Retinol, for example, sinks in and immediately begins triggering your cell turnover for newer, fresher skin, while vitamin C increases your skin's collagen production. 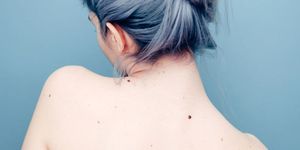 How to Get Rid of That Annoying Summer Back Acne 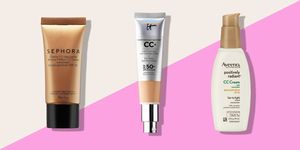 The 5 Magical CC Creams We\'re Obsessed With
And though actives are the only tried-and-true ingredients that can seriously change the entire appearance of your skin, getting rid of wrinkles, age spots, redness, zits, and more, they almost always cause a temporary breakout (frequently called "purging") when you first start using them.

Yes, it's basically why the whole "it gets worse before it gets better" adage exists in the skincare world. "Not everyone experiences purging, but if you're acne-prone, don't freak out if you start breaking out a few weeks after you begin a new active," says Gohara, who notes that that breakout should subside within a week or two.

"Basically, these products just accelerate your skin's natural exfoliation process, bringing all of the trapped sebum and gunk to the surface of your skin quicker," she says. "So instead of getting that zit in a month, you're getting it right now."

Related Story
Why You Should Switch to a Water-Based Foundation

And if nothing major has happened to you, you're not using an active, and your zits look completely normal, in the usual place in your face, then you're likely just dealing with a regular ol' breakout. Still, if you suspect the product is the culprit, despite these signs, try stopping it for three weeks, then re-introducing it for another three weeks. If you break out again, you'll have your answer. Happy slathering!

Chloe Metzger Deputy Beauty Director Chloe Metzger is the deputy beauty director at Cosmopolitan, obsessively writing about new makeup launches, the best hair products (curly girl here; whattup), and the skincare formulas that really work for every skin type (follow her on Instagram to see behind-the-scenes pics of that magazine life).
Advertisement - Continue Reading Below
More From How to Get Rid of Acne
Fix Your Acne with Face Mapping
9 Tried-and-True Ways to Get Rid of Cystic Acne
Advertisement - Continue Reading Below
The Only 5 Beauty Products You Need
5 Beauty Products You Need Right Now
Read This Before Trying Glossier's New Zit Stick
Reddit Swears This $7 Cream Cures Cystic Acne
Yes, Your Derm Pops Her Pimples Too
Why You're Suddenly Breaking Out in Your Mid-20s
5 Causes for Red Spots or Bumps on Your Skin
This Hack to Covering Acne Is Honestly Genius