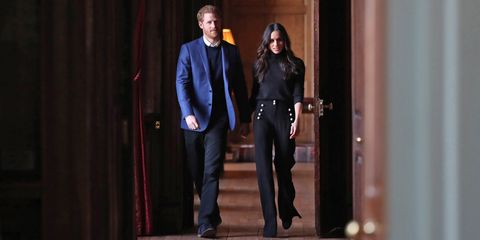 According to a new report in E!, Prince Harry's friends knew that Markle was the one when he took her camping in Botswana for their third date. The romantic, yet surprising, date, which involved camping "out under the stars in the African bush" was apparently a clear sign to many that the royal had finally met his match.

The publication suggests that one of the main factors bonding Markle and Prince Harry together is the fact that they're both "the offspring of couples who fell out of love." Markle's parents got divorced when she was six, while Prince Charles and Princess Diana separated when Prince Harry was eight. As such, the couple has a similar family history, and has experienced what it's like when your parents split up.

Related Story
We Got All the Details on Meghan Wedding Tiara

Even though Markle is still close with her mother, Doria Ragland, and father, Thomas Markle, it's clear that she has found a true family with her new fiancé. As Prince Harry said of Markle's first Christmas at Sandringham, it would be an experience "that I suppose [Meghan's] never had."

E! reiterates that, "For Meghan and Harry, their similar struggles seem to have helped cement their connection." Having both experienced familial break-ups as children, their bond is all the stronger, and it explains their keen focus on being a family.