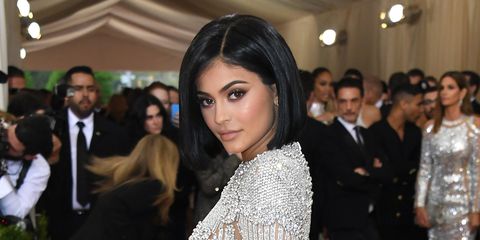 Since giving birth to baby Stormi on Feb. 1, 2018, Kylie Jenner has returned to social media in a big way.

After hiding out for almost the entire nine months of her pregnancy, the makeup mogul has been sharing copious amounts of selfies since her baby arrived. Posting several snaps of her latest look, Jenner bared her midriff, while keeping things casual in sportswear:

Since giving birth, Jenner has been sharing more and more selfies, and is clearly feeling super happy and confident since becoming a mom. This isn't the first time she's bared her midriff, either.

Jenner recently shared several hot tub photos, also featuring her bestie Jordyn Woods, in which she was wearing a bikini:

And at the start of March, the creator of Kylie Cosmetics shared a stunning mirror selfie, in which she was wearing an extremely revealing top:

Jenner announced Stormi's birth on February 4, 2018, after keeping her pregnancy a secret. She also shared an emotional video on social media, which documented her entire journey to becoming a new mother, showing her growing baby bump, and the family's reactions to the baby news. Despite rumors first breaking in September 2017 that Jenner was expecting, the news wasn't confirmed until after she'd given birth.

Of her pregnancy, Jenner wrote on social media, "Pregnancy has been the most beautiful, empowering, and life changing experience I’ve had in my entire life and I'm actually going to miss it. I appreciate my friends and especially my family for helping me make this special moment as private as we could.”