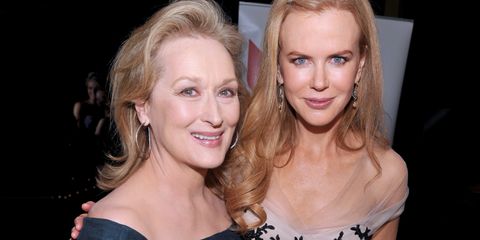 Filming for Big Little Lies season two is underway and, yes, that means set pictures. And, yes, those pictures now include new castmember Meryl Streep. Nicole Kidman posted a picture of her fellow Oscar-winner working on a scene with their on-screen sons and grandsons, respectively.

"First day on the set with Meryl and “my” darling boys! #BigLittleLies," Kidman captioned the photo, which shows the TV family huddled around a tablet, looking at something together.

First day on the set with Meryl and “my” darling boys! #BigLittleLies

Streep and Kidman worked together on 2002's The Hours and they've been friends ever since, regularly reuniting with hugs and smiles at various awards shows.

Can’t wait for y’all to see what we have in store ! 🌟 #BigLittleLies2 @nicolekidman @hbo

Kayleigh Roberts Contributor Kayleigh Roberts is the weekend editor at Marie Claire, covering celebrity and entertainment news, from actual royals like Kate Middleton and Meghan Markle to Hollywood royalty, like Katie Holmes and Chrissy Teigen.
Advertisement - Continue Reading Below
More From Celebrity
Khloé Kardashian Is Being Trolled Over Febreze
Katie Holmes Is in Head-to-Toe Chloé at Their Show
Advertisement - Continue Reading Below
A 'Friends' Reunion Special Is Coming to HBO Max
Ariel Winter Now Has Strawberry Blonde Hair
46 Stars Who Dated Before They Were Famous
Every Easter Egg in Taylor Swift's 'The Man' Video
Kate Middleton Does Some Sports in $38 Sneakers
Sarah Hyland Defends Ariel Winter’s Dress on Insta
Prince Harry Wants to Go by Just "Harry" Now
Ashley Graham Talked Breast Pumping in an Uber