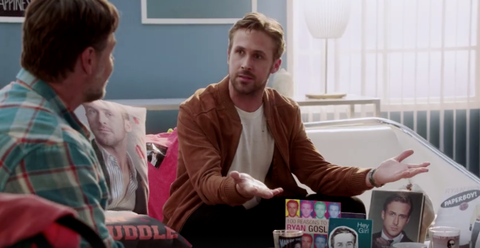 We're all familiar with the Ryan Gosling "Hey Girl" meme. Oh, you're not? Here's a nice reminder:

Glad we got that cleared up. Now we can talk about this hilarious BuzzFeed video where Russell Crowe and Gosling, who co-star in the upcoming movie The Nice Guys, sit down for some couples therapy.

Well, it's more like an intervention where Crowe confronts Gosling (Are they lovers in this? Let's just go with it…) over all the romanticized merchandise with his face on it. The betrayal is too real.

But between a few high-pitched screams of "God d*mnit!" the star of our favorite meme claims he's never even said "hey girl." Doesn't seem like Crowe is convinced. Us neither.

Let's watch these two try to sort out their problems with the help of their therapist Melissa Rauch from The Big Bang Theory and The Bronze: