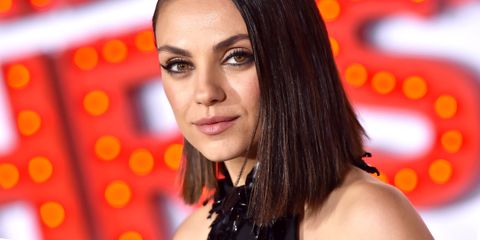 'Tis the season to go nuts with the scissors and chop off all of your hair, as so many celebrities have greatly demonstrated in recent weeks (think: Kim Kardashian's sleek, shoulder-length bob, or Demi Lovato's piece-y layered bob).

And now, Mila Kunis has just been added to the list of Most Inspiration Hair Photos. The actress just debuted an asymmetrical lob on the CinemaCon red carpet last night, and the shorter cut looks incredible. Before the event, her hairstylist Chad Wood posted a photo of the fresh style on Instagram, writing, "New haircut on Mila Kunis for CinemaCon." A man of few words, clearly, but if a picture speaks 1,000 of them, what else is there to say?

The change is subtle for Kunis, who's already been rocking a shoulder-length lob for a while, but the new choppy angle, along with some brighter auburn highlights, is giving me major inspo for my next summer haircut.

Related Stories
Kim Kardashian Just Chopped Off All of Her Hair
Demi Lovato Cut Her Hair Into a Bob
Alex Warner
Advertisement - Continue Reading Below
More From Trending Beauty
Glitter Pumpkin Butts Are a Thing for Halloween
I Tested Meghan Markle's Top Beauty Products
Advertisement - Continue Reading Below
Behold: The Self-Tanner Fail to End All Fails
This Is Pinterest's #1 Halloween Makeup Idea
These 3 Products Cured This Woman's Acne
Princess Eugenie Just Dyed Her Hair Bright Red
13,000 People Swear By This Eye Cream
Post Malone Cut His Hair and Looks Unrecognizable
Shay Mitchell Will Only Use This One Concealer
People Are Freaking Out About Emma Stone's Hair