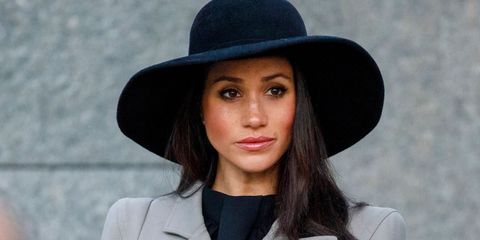 Meghan Markle has given her first official comment regarding her father, Thomas Markle, and whether he'll be at her wedding on Saturday.

"Sadly, my father will not be attending our wedding," she said in the statement released by Kensington Palace. "I have always cared for my father and hope he can be given the space he needs to focus on his health."

"I would like to thank everyone who has offered generous messages of support," she continued. "Please know how much Harry and I look forward to sharing our special day with you on Saturday. "

"What has been made clear to me about today's palace statement is that Meghan Markle felt it was important she should address people personally on what has been happening with her father," a royal reporter tweeted about the statement. "While it's been a difficult few days, she and Harry are said to be very excited about their wedding on Saturday and have the rest of their family and friends around them to support them. They say it will still be a great day."

Meghan's statement follows a whirlwind of news about her father, his health, and whether he'd make the trip to Windsor for Saturday's events. Last weekend it was discovered that Thomas Makle had faked paparazzi photos of himself preparing for his daughter's wedding to Prince Harry. Markle also revealed that he had suffered a heart attack and was experiencing chest pain from stress. He reportedly checked himself into the hospital again this week and underwent heart surgery.

With Thomas Markle confirmed not to be attending his daughter's wedding, it raises uncertainties about who will walk Meghan down the aisle. Kensington Palace had previously stated that her father would give her away Saturday, but now it is suspected that Meghan's mother will take his place. (Though one royal reporter has suggested her soon-to-be father-in-law Prince Charles could be an option!) According to the previous plan, Doria Ragland would just drive to the church with her daughter, but now she might do double duty and walk her down the aisle as well.

Meghan's mother was spotted making her way to the U.K. earlier this week, carrying a Burberry garment bag, which could give a hint as to what she'll be wearing for the big day.