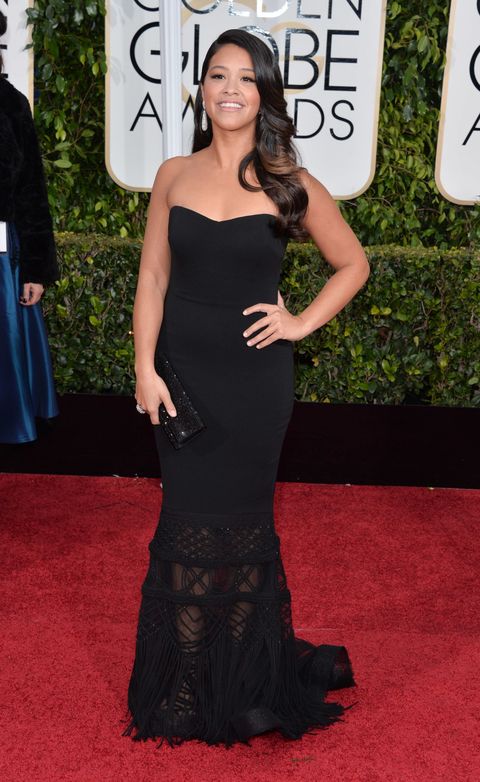 Thanks to Gina Rodriguez, one lucky teen got the Hollywood treatment for her high school prom.

Back in January, Jessica Casanova of Buffalo, New York tweeted at the actress saying she'd love to wear her Golden Globes dress, probably not realizing that the actress would reply and go out of her way to make her dream come true. After a bit of back and forth on Twitter, Casanova received the black Badgley Mischka gown that Rodriguez wore to her first Globes in 2015 where she won best actress in a TV comedy.

Now that prom season has arrived, Casanova has shared photos of herself in the special dress and we seriously feel like proud parents. She's got her whole life ahead of her! And unlike many of us, looking back at her prom photos will be a very happy memory.

@TheJessica_C/Twitter
This content is created and maintained by a third party, and imported onto this page to help users provide their email addresses. You may be able to find more information about this and similar content at piano.io
Advertisement - Continue Reading Below
More From Celebrity
Meghan Discussed Her Daughter in Vax Live Speech
Prince Harry Talks Digital Pandemic at Vax Live
Advertisement - Continue Reading Below
Harry and Will Have Been Arguing for Months Now
Prince Harry Doesn't Regret His Oprah Interview
Archie Has a Distinct American Accent, Apparently
Hailey Wore a Nude Blazer and Micro Dress
Gabrielle's TikTok About Her Prom Date is So Funny
Victoria Beckham Shuts Down 'Spice World 2' Rumors
Kendall Jenner Shared Her Experience of Anxiety
'The Voice' Star Blake Shelton Opens Up About Gwen