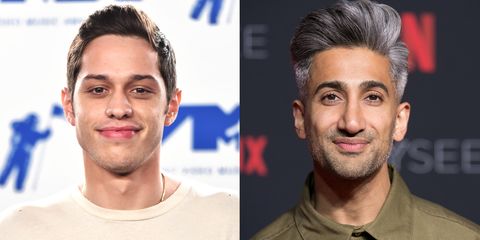 In today's Ariana Grande and Pete Davidson update, turns out Queer Eye fashion guru Tan France will reportedly play a crucial role in the couple's wedding. According to Page Six, France says Davidson has asked for help with his wedding day wardrobe.

"He asked if I'd help him, the answer is yes," France said yesterday about the 24-year-old. This won't be the first time France has styled Davidson, either—earlier this year, the duo starred in a Saturday Night Live skit in which France reworked Davidson's wardrobe. At the time, Davidson was still dating Cazzie David, and France worked to give his "guido trash" style a serious upgrade.

Although Davidson and Grande have yet to announce a date, the new couple has certainly been busy—after confirming their engagement with cryptic Instagram captions, and later an official announcement on The Tonight Show, the duo has reportedly moved into a New York City apartment.

Yesterday, in honor of Grande's 25th birthday, Davidson took to Instagram to profess his love for the singer. "Words can’t express what a real fucking treasure this one is," he wrote.

I'm hoping France isn't the only Fab Five member to assist with what's shaping up to be America's very own royal wedding—can you imagine what Jonathan Van Ness could do with Davidson's hair?! I rest my case.