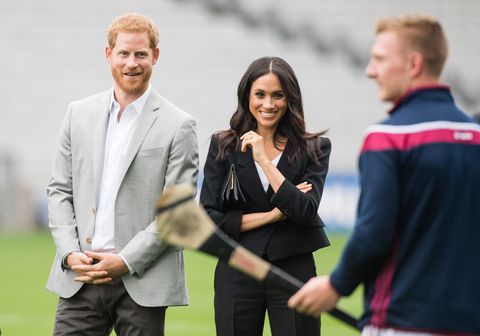 Just an hour after meeting with Irish President Michael Higgins, Prince Harry and Meghan Markle have already arrived at the next stop on their whirlwind tour of Dublin, Ireland. Everybody keeping up? Next on the agenda is legendary sporting ground Croke Park, and somehow between the two, both Duke and Duchess have undergone a major outfit change. Was it done in the car? Did they stop off at a public bathroom along the way? The mysteries of the royal family, folks.

Looking the most casual for a public appearance that we've seen since their wedding, Meghan and Harry could almost be mistaken for your average, well dressed couple in their matching, dressed down suits. The Duke traded in his smart navy blue trousers and jacket for a more laid back outfit with dark pants, a lighter blazer, and an unbuttoned white shirt.

Meanwhile, Meghan has already hung up her taupe Roland Mouret dress at the back of the closet, and changed into a more casual Givenchy look. She styled black cigarette pants with a sleek cropped sleeve blazer, and a simple white shirt underneath. Accessories were minimal too, with a gold buckle belt, black clutch, and the same heels from her earlier appearance. Heels on a field sounds like a recipe for disaster, but let's let that one slide.


They even did some sporty stuff themselves:

The couple seemed to be in their element as they toured the sporting grounds together hand in hand and met with young Gaelic football fans. No time for a sit down and a sandwich yet though, as Meghan and Harry are still set to view the Old Library at Trinity College, visit the Famine Memorial on the bank of River Liffey, and walk to the EPIC Irish Emigration Museum. They will then attending DogPatch Labs, a space for technology start-ups in Dublin. What a day, I’m tired just reading about it.