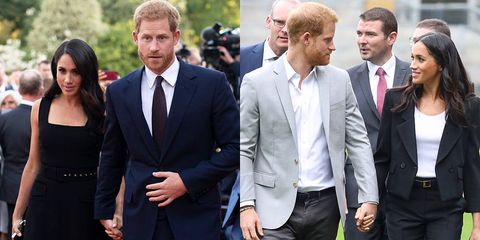 Move over Paris, because Dublin is officially the new city of love. That’s if Meghan Markle and Prince Harry are anything to go by anyway, as they’ve been showing more PDA than your average royal couple dares during their trip to the Irish capital this week.

Royals fans speculated that the Duke and Duchess of Sussex would be keeping their public affection to a minimum from now on, after they refrained from holding hands at the Queen’s Young Leaders Awards two weeks ago. But, since being on their best behavior for that particular appearance, the newlyweds seem to have thrown royal protocol out the window and have since been more handsy than ever before.

While touring the Croke Park sporting grounds on Wednesday morning, Meghan and Harry looked completely at ease with one another as they strolled hand in hand with affectionate glances on the field. And, just the night before at a Glencairn House reception, the couple also opted for some of their typical shy PDA by arriving holding hands for the occasion. Maybe the height of Meghan's high heels have something to do with it?

They also shared a particularly cute moment with a child on the field, which is all kinds of heart-feelings:

There are no official rules that state that royal family couples can’t show a little love when out in public, but it seems to be a case of judging the situation to see whether PDA is appropriate. Any kind of physical intimacy at more formal events such as appearing with the Queen is strictly a no-go, but a little reassuring hand hold during day trips and more casual appearances, like those in Meghan and Harry’s Dublin current tour, should be perfectly acceptable.

Let's leave that one down to Harry and Meghan to decide. But hey, we're here for the cuteness! 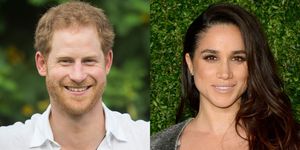 Harry and Meghan's Dating Timeline
Lucy Wood Contributor, MarieClaire.com Lucy Wood spends most of her time writing about celebby things, reading books, and waiting for the glorious day that she have enough millions for a pet sloth.
This content is created and maintained by a third party, and imported onto this page to help users provide their email addresses. You may be able to find more information about this and similar content at piano.io
Advertisement - Continue Reading Below
More From Celebrity
Marvelous Women Scarlett Johansson & Florence Pugh
Gigi Shares Glimpse at Baby's Wardrobe
Advertisement - Continue Reading Below
Matthew McConaughey and His Son Are Twinning
Ashley Graham Opened Up About Sex After Childbirth
Brad Pitt and Nicole Poturalski Have Broken Up
Chrissy Teigen Shared a Sweet Video With Luna
EmRata Displayed Her Bump in an Open Button-Down
Harry Sent a Legal Warning Over "False" Article
Chrissy Teigen Talked About Her Baby Loss Photos
Chrissy Teigen Opens Up About Her Loss