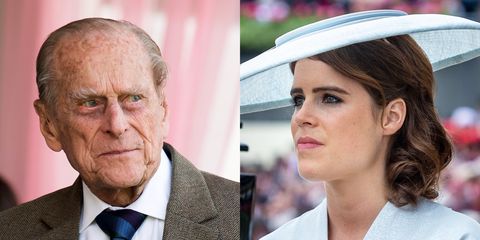 In 2018, when you hear the phrase "the royal wedding," your mind immediately goes to Prince Harry and Meghan Markle's May wedding in Windsor, England. But Harry and Meghan are not the only royals tying the knot this year.

In October, Princess Eugenie will marry Jack Brooksbank at St. George's Chapel in Windsor—the same place her cousin, Harry, got married this spring. One thing that might be very different about Eugenie's wedding, however, is a key RSVP on the guest list. Her grandfather, Prince Philip, is reportedly still not sure if he'll attend the fall nuptials.

Philip, who is 97, retired from public service last year and underwent hip replacement surgery in April of this year. He's been an infrequent attendee at royal functions since his retirement, but he did make it out to Harry's wedding. That does not mean he'll make the same effort for Eugenie's big day.

"He does what he wants," a source close to the royal family told People. "He made a supreme effort for Harry. I would be very surprised if he did go, because he is so estranged from Fergie. I think he will decide at the 99th hour."

The estrangement from Fergie the source refers to is the tension between Philip and Sarah Ferguson, Duchess of York, who separated from Philip's son, Prince Andrew, in 1992.

Whether Philip makes it out for the special day or not, Eugenie and Jack are taking a page from Harry and Meghan's wedding book and inviting 1,200 members of the public to fill the castle grounds during the event, so they'll be in good (and plenty of) company regardless.