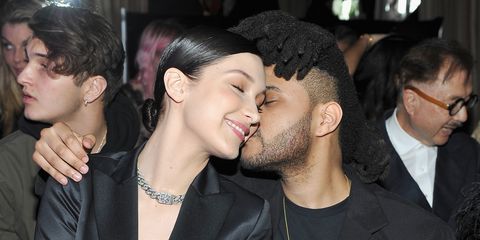 We've all accepted that Summer 2018 is the Summer of ~Love~, right? Let's just go ahead and add Bella Hadid and The Weeknd to the list of lovestruck celebs affected by the magic of Summer 2018, shall we?

No, they're not engaged like Nick Jonas and Priyanka Chopra or Justin Bieber and Hailey Baldwin or Ariana Grande and Pete Davidson. They aren't even technically officially back together—but they certainly aren't hiding that they're once again super feeling each other, either.

After months of meeting up for dates all over the world and making oh-so-casual appearances on each other's social media, the (almost definitely on-again) couple took to their respective Instagram stories to gush about the sweetness of their ~love~ (or at least of their ~intense like~).

Here's Bella's post, a simple black-and-white photo of The Weeknd (real name Abel Tesfaye), captioned "Sugar." Unless she's really close to the bodyguard chilling by the door in the background or way more into cars than we realize, Bella appears to have ascended to the pet name stage of the relationship.

Abel posted a photo of his own, which appears to show Bella in silhouette on an airport runway with the sunset in the background. His caption? "So sweet." Just like everything about these pictures.

Bella and Abel reportedly first reconnected at Coachella in April. They were later spotted kissing at the Cannes Film Festival and then hung out in France for more intimate dates. They reportedly celebrated the Fourth of July together at Abel's Los Angeles mansion and then publicly galavanted around Tokyo together before reports surfaced that they were exclusive again. We're one gushy Instagram grid post or red carpet appearance away from this being all but undeniable.

Kayleigh Roberts Contributor Kayleigh Roberts is the weekend editor at Marie Claire, covering celebrity and entertainment news, from actual royals like Kate Middleton and Meghan Markle to Hollywood royalty, like Katie Holmes and Chrissy Teigen.
This content is created and maintained by a third party, and imported onto this page to help users provide their email addresses. You may be able to find more information about this and similar content at piano.io
Advertisement - Continue Reading Below
More From Celebrity
Harry Doesn't Want Drama at Philip's Funeral
How Meghan Feels About Missing Philip's Funeral
Advertisement - Continue Reading Below
Eva Longoria Loves Her Mini Trampoline
The Royals Won't Wear Uniform at Philip's Funeral
Jennifer Lopez and Alex Rodriguez Announce Breakup
Charles Teared Up As He Read Tributes to Philip
The Gucci Family Is Upset About 'House of Gucci'
Taylor Sent the Sweetest Gift to a Frontline Nurse
Royal Family Shares Rare Photo of Prince Philip
Chloe From 'Too Hot to Handle' Is in 'The Circle'