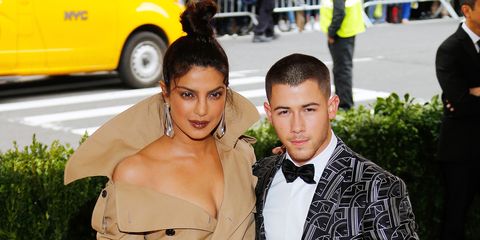 After weeks of speculation, Priyanka Chopra and Nick Jonas have officially confirmed their engagement. Nick and his parents, Paul and Denise Jonas, flew to India on Thursday ahead of an engagement party hosted by Priyanka's family, E! News reports.

The engagement party is tradition in India. At the event, the couple exchanges rings in front of their family and friends, making the engagement truly official.

"It's a tradition for [the families] to meet before the wedding and Priyanka's family insisted on hosting the Jonas family in their country," a source told E! of Nick and Priyanka's engagement party. "Priyanka wants everything to be traditional to respect her family's values, and definitely an Indian wedding. Priyanka and Nick are excited for everyone to meet and to celebrate. All of the plans are moving quickly and Priyanka and Nick do not want to have a long engagement."

The couple confirmed the wonderful news in simultaneous, identical posts on Instagram.

In the picture Priyanka and Nick chose, they stare lovingly into each other's eyes while Priyanka rests her left hand on Nick's chest, showing off her stunning engagement ring.

"Taken.. With all my heart and soul," Priyanka captioned her version of the image.

Nick was even more direct in his caption, which reads, "Future Mrs. Jonas. My heart. My love."

These twinning Instagram posts are a Jonas family engagement tradition. Nick's older brother, Joe, did the same thing with his fiancée, Game of Thrones actress Sophie Turner, when they announced their engagement in October 2017.

Priyanka followed up the identical posts with a gallery post that shared highlights from the couple's engagement ceremony.

"The only way to do this... with Family and God. Thank you all for your wishes and blessings 🙏🏼♥️🎉," she captioned the series of photos.

Kayleigh Roberts Contributor Kayleigh Roberts is the weekend editor at Marie Claire, covering celebrity and entertainment news, from actual royals like Kate Middleton and Meghan Markle to Hollywood royalty, like Katie Holmes and Chrissy Teigen.
This content is created and maintained by a third party, and imported onto this page to help users provide their email addresses. You may be able to find more information about this and similar content at piano.io
Advertisement - Continue Reading Below
More From Celebrity
Will's Talk with Charles That Led Him to Kate
The Queen Saved Will from a Breakdown as a Teen
Advertisement - Continue Reading Below
Blake Can't Believe She's Still Married to Ryan
Hilary Duff Reveals Her Pregnancy on Instagram
Prince Philip Has "Walked Away" From Prince Harry
Jessica Mulroney Slams Fake Friends on Instagram
Serena Posted Olympia's First Tennis Lesson on IG
Camila Cabello's Hair Has *Never* Been This Short
Diana's Note About Her BBC Interview Is Missing
Melania Didn't Want to Hold Trump's Hand Again