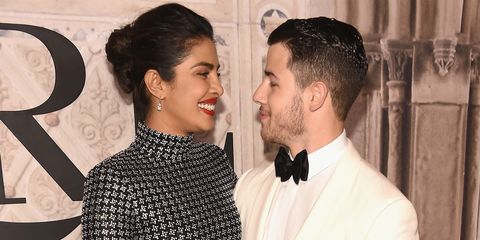 Is going Fashion Week official a thing? Can we at least pretend it's one for a minute? Because these pictures of Nick Jonas and Priyanka Chopra at Fashion Week warrant a special moment of appreciation.

Last night, the newly-engaged and always-adorable couple continued their campaign for cutest couple of the century at New York Fashion Week, where they attended the Ralph Lauren 50th Anniversary event at Bethesda Terrace.

They walked the carpet together at the event — notably their first red carpet photo op together as a couple (their only other carpet appearance to date is the 2017 Met Gala, a full year before their romance kicked off).

And what was that official photo op like? Well, for one, they became real life incarnations of the heart eye emoji.

They whispered little secrets to each other and nuzzled and canoodled (ugh — it feels kind of gross to describe people as canoodling, but this is textbook canoodling):

And they looked amazing, of course, but that's kind of a requisite when your meet-cute is the Met Gala, no? Priyanka wore a floor-length, silver metallic gown with long sleeves and a high neckline for the event, while Nick went classic in tux with a white jacket and black pants.

MarieClaire.com was also at the Ralph Lauren event last night and can confirm firsthand that Nick and Priyanka's lovefest extended past the red carpet and into the party. Priyanka's mom also joined them, proving they're already one big happy family.

Naturally, Nick and Priyanka also documented their date night on Instagram (they have been nothing if not A+ Instagram documentarians of their love). Nick posted a black and white shot of the two of them basically frolicking, because love means frolicking at Fashion Week like you live in a rom-com, apparently:

He also shared a snap of their meeting with the man of the evening himself, Ralph Lauren. "The man. The myth. The Legend," Nick captioned the photo.

The man. The myth. The Legend. @ralphlauren

During an appearance on The Tonight Show Starring Jimmy Fallon Friday night, Nick opened up publicly about his engagement, including their traditional Roka ceremony in India.

"For she and I, I think it was just nice to have that time with the family first. Have that private moment then be able to share with the world afterwards," he said. "We had this beautiful ceremony and we felt so connected, our families all met, it was spiritual and then we put it on Instagram, we were like ‘Oh my God! It’s official,'" he added, jokingly.

Kayleigh Roberts Contributor Kayleigh Roberts is the weekend editor at Marie Claire, covering celebrity and entertainment news, from actual royals like Kate Middleton and Meghan Markle to Hollywood royalty, like Katie Holmes and Chrissy Teigen.
Advertisement - Continue Reading Below
More From Celebrity
Rih Was Shocked by the Reaction to Fenty Beauty
Behold: Celebrities Who Dated Normals
Advertisement - Continue Reading Below
Kate Middleton & Michelle Obama Use This $64 Cream
A Full Timeline of Tyler C. & Hannah B.
Blake and Ryan Donate $400K to NY Hospitals
Prince William May Work as an Air Ambulance Pilot
Harry Is Likely to Get U.S. Diplomatic Status
Harry Was Forced to Give Up His Military Titles
Ariana Grande Revealed Her Natural Curls
Fans Love This Accident Meme of Queen Elizabeth