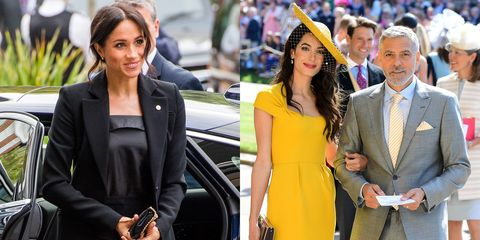 Performing her many duties as the Duchess of Sussex hasn't stopped Meghan Markle from making time for her friends. Case in point: The Daily Mail reports that Meghan has made time to help her good friend, Amal Clooney, decorate her home in England.

Related Story
Meghan and Harry Vacationed with Amal and George

No, Meghan isn't doing the down and dirty work of pulling samples and crafting mood boards (although we're sure she could because lifestyle stuff is kind of her thing — remember The Tig?), but she is playing an important role in the redesign: She connect Amal with famed Soho House designer Vicky Charles.

Apparently, Amal was immediately smitten with the style of the ultra-exclusive, members-only club (which Meghan introduced her to, as well) and wanted to emulate the look in her and George's riverside home in Sonning-on-Thames, in England.

Of course, this is all based on unsourced reports from the Daily Mail, so we'll take it with a grain of salt and assume the Clooneys' home could look nothing like Soho House, but one part of the story definitely checks out: The part where Meghan would do anything for a friend.

It's also an established truth that Meghan counts the Clooneys, and Amal in particular, among her closest friends. The Hollywood power couple were invited to Prince Harry and Meghan's highly-anticipated royal wedding in May.

Amal and George were among the best dressed couples at the high-profile event, with Amal wearing a stunning, sunny yellow dress by Stella McCartney, along with a matching hat and veil. George coordinated with his wife, wearing a grey suit with a blue shirt and a yellow tie and matching pocket square.