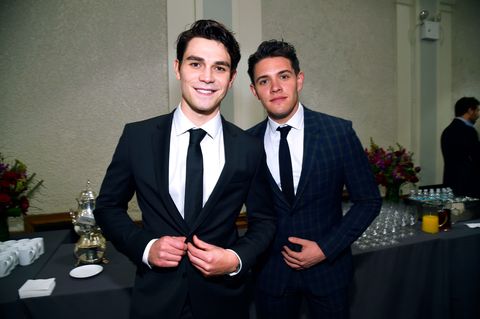 If you audibly gasped when you saw that Cole Sprouse Instagram photo of Lili Reinhart yesterday—in which he called her "my muse" and "my love" alongside a topless photo of the now-22-year-old —you weren't alone. Seems the rest of the cast of Riverdale were just as taken aback as you were by the uncharacteristic display of public affection from the notoriously private couple—and KJ Apa and Casey Cott, who play Archie and Kevin on the CW hit, decided to have some fun with it.

To backtrack: Yesterday was Reinhart's 22nd birthday. Sprouse, who plays her onscreen boyfriend Jughead (a.k.a. one-half of "Bughead") and is pretty clearly also her boyfriend in real life, posted the picture of Reinhart to Instagram: "Both the birthday and the gift. My little muse, happy birthday my love." (Reinhart "liked" the photo on Instagram, so I'm assuming she was comfortable with it.)

This afternoon, Casey Cott posted his own version to Instagram. "Both the birthday and my gift. My little muse, have a good day my love," he captioned a picture of costar KJ Apa. In the shot, Apa looked winsomely at his own reflection, one arm folded over his chest, in a parody of Reinhart in the original photo.

Both the birthday and my gift. My little muse, have a good day my love.

The Riverdale cast are clearly close in real life—which is a relief, because I can't keep up with the complexities of their onscreen and offscreen relationships—and are constantly Instagramming shots of one another and commenting on each other's posts.

Even when they're not filming, they're best friends. Apa and Sprouse once road-tripped from LA to Vancouver together, and Reinhart and costar Camila Mendes are inseparable: ""Once the walls came down and our inner goofballs began to reveal themselves, we were unstoppable," Camila told Seventeen. "Now it's almost like we speak our own language."

Related Stories
Everything You Didn't Know About 'Riverdale'
A Complete Glossary of Important 'Riverdale' Terms
Jenny Hollander deputy editor, MarieClaire.com Jenny is Marie Claire’s deputy digital editor, editing and writing about everything from politics to reality television to accessories and celebrity news.
Advertisement - Continue Reading Below
More From Celebrity
The Future of Harry & Meghan's Sussex Royal Brand
Sussexes Announce Plans to Move to North America
Advertisement - Continue Reading Below
Queen Says She's "Particularly Proud" of Meghan
Meghan and Harry Will Still Live at Frogmore
How Meghan Markle and Prince Harry Will Make Money
Harry and Meghan's Royal Exit Is Official
Selena Got Choked Up Reflecting on Her Love Life
Queen's Aides Are Struggling to Finalize Megxit
Katie Holmes Is Struggling With Adulthood, Too
Doria Ragland Says Meghan Will "Always Be Okay"