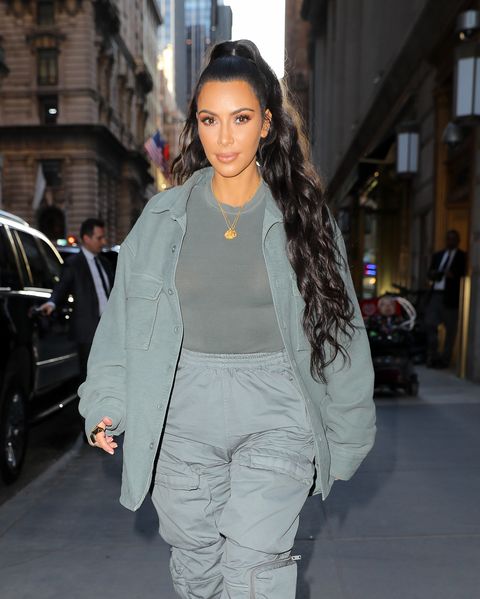 Years from now, future generations will look back at 2018 in awe, and ask those us who lived through it what it was like to experience the Great Kardashian Baby Boom of 2018. They'll also ask us a lot of much harder, more depressing and more serious questions of course, but if we get through all of that, they might ask about the KarJenner Baby Boom.

Or maybe they won't. Whatever. None of that changes the fact that Kim Kardashian has shared a new adorable family picture — the very first public picture of the youngest KarJenners, Chicago West, Stormi Webster, and True Thompson, all together.

If you need a recap, the big boom went down earlier this year, starting with Chicago, who was born on January 15th via surrogate (and who made her own world debut in Kylie Jenner's birth announcement video).

Next came little Stormi, whose arrival on February 1 also marked the end of Kylie's unofficial social media blackout (Kylie famously kept her pregnancy a "secret," refusing to officially confirm that she was even expecting until after the birth).

Then, in April, Khloé Kardashian complete the new trifecta of KarJenner girls when she welcomed her daughter, True Thompson (sadly amid news that Tristan Thompson had been cheating on Khloé throughout her pregnancy). Like her cousins, True was quickly introduced to Instagram and Snapchat filters.

Chi, Stormi, and True will probably frame this picture and hang it in the headquarters of their future business empire.

This content is imported from {embed-name}. You may be able to find the same content in another format, or you may be able to find more information, at their web site.
Kayleigh Roberts Contributor Kayleigh Roberts is the weekend editor at Marie Claire, covering celebrity and entertainment news, from actual royals like Kate Middleton and Meghan Markle to Hollywood royalty, like Katie Holmes and Chrissy Teigen.
This content is created and maintained by a third party, and imported onto this page to help users provide their email addresses. You may be able to find more information about this and similar content at piano.io
Advertisement - Continue Reading Below
More From Celebrity
Charles Is Reportedly “Aggrieved” With Harry
Adele Stuns in Rare Birthday Photo Dump
Advertisement - Continue Reading Below
Serena and Olympia Twinned in Swimsuits Again
Joe Jonas Opens Up About Parenting Daughter Willa
Kourtney & Travis Have Talked About Marriage
Meghan's Author Bio Includes the Sweetest Detail
46 Moments That Changed the Royal Family Forever
Chloe From 'Too Hot to Handle' Is in 'The Circle'
Why Meghan Wasn't at the Vax Live Concert
A TikToker Went Viral for Un-Matching Ben Affleck