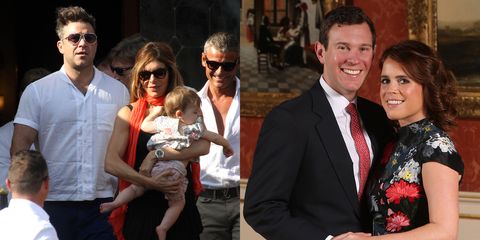 Meet Theodora Rose Williams, Robbie Williams' daughter. The adorable six-year-old snagged a coveted place in Princess Eugenie's royal wedding party as a bridesmaid. Here's what you need to know about her.

Her parents are celebrities...

Theodora Rose Williams is not just your average six-year-old. The daughter of singer Robbie Williams and actress Ayda Field Williams, she's bringing a bit of celebrity to Princess Eugenie's wedding ceremony. Robbie Williams was a member of the pop group Take That from 1990 to 1995 before breaking off and finding success as a solo artist.

...And they're very good friends of Princess Eugenie and Princess Beatrice.

According to the Daily Mail, Robbie and Ayda are longtime friends of Princess Eugenie and her sister, Princess Beatrice.

Her dad credits her with saving his life.

Theodora Rose has another very special credit to her name: lifesaver. Her dad, who has struggled with drug and alcohol addiction, credits her with saving his life.

"I was days away from dying quite a few times on all manner of substances," he told the Daily Mail in 2013 of his struggles with addiction. "Unfortunately I’ve been in a place where I didn’t care if I was on the planet or not. I do care now, but at the time I was so deep into addiction I knew I was probably going to die soon but I didn’t care. I was taking a whole cocktail of drugs. My left arm went numb I was taking so much cocaine."

In another interview, he called fatherhood a "reason to live."

"Having kids is like an emotional atomic bomb," he told the Irish Times. "It’s a reason to live and a reason to go to work. And this is the best job in the world, but it is a job."

She goes by Teddy.

Happy 6th Birthday to my beautiful Teddy!! I am constantly amazed at how magic you are. You are my real life unicorn. We love you so much 🦄🦄🦄🌈🌈🌈❤️❤️❤️❤️❤️❤️❤️❤️❤️❤️❤️

Theodora Rose has an adorable nickname—Teddy. If you're ever looking on her parents' Instagrams and see a reference to her, it will be as Teddy.

Theodora Rose is joining a great group of bridesmaids at the royal wedding. Maud Windsor, the four-year-old daughter of Lord Freddie Windsor and his wife, actress Sophie Winkleman, and Princess Charlotte will also serve as bridesmaids for Eugenie's big day. You can see the full list here.

Like Princess Charlotte, Theodora Rose is also a fan of horseback riding. Her mother has even shared videos of her riding on Instagram. (Maybe she and Charlotte could bond over their shared hobby?!)

Her parents rarely share pictures of her face on social media.

If Theodora Rose is caught on camera at the royal wedding, it will mark a rare glimpse at her face. Her parents regularly share photos and videos of her on social media, but carefully don't show her face.