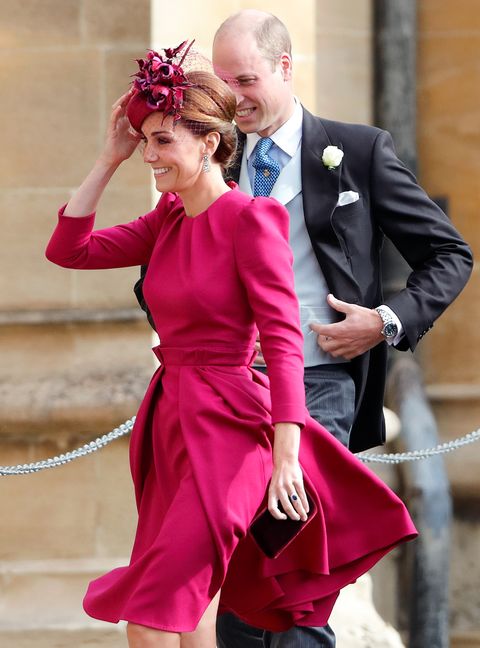 Did the outfit that Kate Middleton wore to Princess Eugenie's royal wedding on Friday look familiar? If it did, it's not your mind playing tricks on you: It's a nearly-identical match to a dress she wore last year.

Kate wore the exact same dress (also by Alexander McQueen and everything) in a slightly lighter shade of pink in June 2017 for Trooping the Colour. At the 2017 celebration, Kate paired the lighter pink version of the dress with a matching hat by Jane Taylor.

The Duchess of Cambridge is known for re-wearing outfits to royal engagements, but in this case, she wore a new dress that's just very, very similar to one she's famously worn before. So why buy the same dress in a slightly different color? And why kind-of, sort-of recycle a look at a huge event like a wedding? Hello! Magazine theorizes that it's Kate's way of making sure she doesn't upstage the bride with her look.

Hello! magazine also points to Kate's fashion choice at Prince Harry and Meghan Markle's wedding in May, where they say the duchess wore a bespoke yellow coat dress by Alexander McQueen that was very similar to the cream coat she wore to her daughter, Princess Charlotte's, christening. According to Hello!, Kate actually requested the yellow version of the look from Sarah Burton at Alexander McQueen, one of her personal favorite designers.

Here's the cream coat dress Kate wore to Charlotte's christening in May 2015:

And here she is in a pale yellow version of the look at Harry and Meghan's royal wedding in May 2018:

Kate's wedding look on Eugenie's big day was definitely a surprise, even if it does fit with her trend of wearing a different version of a previous look. In the past, she's gravitated toward subtler shades and blues as a wedding guest.

Related Stories
Kate Middleton Avoided a Wardrobe Malfunction
William and Kate Had PDA at Eugenie's Wedding
Kayleigh Roberts Contributor Kayleigh Roberts is the weekend editor at Marie Claire, covering celebrity and entertainment news, from actual royals like Kate Middleton and Meghan Markle to Hollywood royalty, like Katie Holmes and Chrissy Teigen.
This content is created and maintained by a third party, and imported onto this page to help users provide their email addresses. You may be able to find more information about this and similar content at piano.io
Advertisement - Continue Reading Below
More From The Ultimate Guide to the Royal Family
See the Royals Socialize at a 1991 Cocktail Party
Eugenie's Pics from Inside Harry and Meghan's Home
Advertisement - Continue Reading Below
Queen Trolled Tourists Who Didn't Recognize Her
Charles Expertly Ignored Boris Johnson's Snafu
How Kitty Spencer's Wedding Dress Honored Diana
Will & Kate Are Nervous About George's Future
George Won't Be Forced to Go to Boarding School
A Slice of Diana's Actual Wedding Cake Is For Sale
This Old Video of the Queen Saying "Nah" Is LOL
Diana Had a Secret Message on Her Wedding Shoes