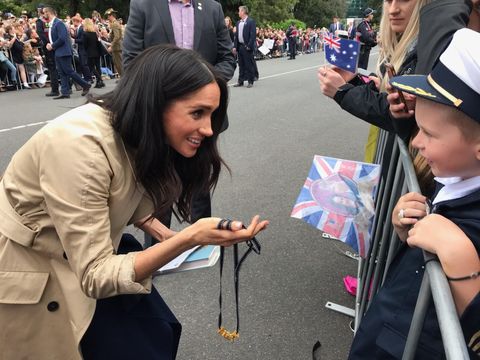 If you're one of the many, many people who want to shop Meghan Markle's style, but who can't always afford her pricy pieces, you're in luck. For just $20, you can own a totally bespoke piece of jewelry from Meghan's new favorite designer—Gavin Hazelwood.

Not familiar with jewelry designer Gavin Hazelwood? You might know him better as "the adorable six-year-old kid who went viral for giving Meghan a necklace made of painted macaroni."

Gavin met Meghan when she and Prince Harry were in Melbourne on their royal tour of Australia, New Zealand, Fiji, and Tonga and gave her the necklace personally. If you've been obsessed with Meghan's macaroni necklace since she debuted the look last week, you're in luck because Gavin has gone into business—well, kind of. He is selling his creations, but not for a profit. Instead, he's donating all of the proceeds to charity in honor of his sister, Clara, who was stillborn in 2014.

"I want to be like the Prince and Princess and support charities. I made more necklaces the same as Meghan’s. If I sell them, I’ll send all the profits to research for stillborn babies. My sister was stillborn in 2014 and I don’t want it to happen anymore."

"He will donate all the profits to research to find out why stillbirth is still happening at such a high rate," Gavin's mom, Rowan, explains to MarieClaire.com "In Australia, there are six stillborn babies born every day, which is one every four hours. The rate per capita in the U.S. is similar, with approximately 65 stillbirths per day. These rates haven’t declined for a long time which is why we’re so determined to help prevent it."

According to Rowan, Gavin's goal is to start his own charity for research into stillborn babies and when people showed interest in his necklaces, he decided it was the perfect chance to raise money and awareness for the cause.

Gavin, with the help of his mom, has set up a website and, by popular demand, is selling his now-famous pasta necklaces worldwide. And, at $20 a piece, buying one is probably the cheapest way to dress like a Duchess.

Since launching his website, Gavin has sold approximately 250 necklaces, with some customers buying multiple pieces. And, if you're worried that the volume of orders might mean you won't get a Gavin Hazelwood original, fret not: His mom assures us that he's still making every necklace himself.

"Gavin is continuing to make every piece by hand," she explains. "I help him with the threading as that part is quite tricky. He enjoys making them and is really organized. And he likes to know where each necklace is going to around the world. He looks up each country on his iPad so it’s a good geography lesson for the aspiring pilot!"

We asked Gavin if he was surprised that so many people are clamoring to buy his necklaces and his answer was as adorable as everything about his viral encounter with Meghan:

"No, because I thought everyone would want to be the same as the princess."

And what did Gavin think about seeing a royal wear his original jewelry?

"I thought it was awesome!"

Well said, Gavin. We have to agree.

Related Stories
The Meghan Markle Effect Is Now Extending to Cars
Meghan Markle Is Now a Best-Selling Author
Kayleigh Roberts Contributor Kayleigh Roberts is the weekend editor at Marie Claire, covering celebrity and entertainment news, from actual royals like Kate Middleton and Meghan Markle to Hollywood royalty, like Katie Holmes and Chrissy Teigen.
This content is created and maintained by a third party, and imported onto this page to help users provide their email addresses. You may be able to find more information about this and similar content at piano.io
Advertisement - Continue Reading Below
More From The Ultimate Guide to the Royal Family
A Look Back at Princess Anne's Life in Photos
A Look at Royal Family Portraits Through the Years
Advertisement - Continue Reading Below
Diana's Ex Is Blasting Her Infamous BBC Interview
Meghan Markle Can No Longer Be a U.K. Citizen
Harry & Meghan Quit Social Media Because of Trolls
Harry Has Been Thriving Since the Royal Exit, TYVM
A Royal Staffer Stole from the Palace & Sold Items
The Royal Family Marks Kate Middleton's Birthday
Harry & Meghan Probably Won't Return to Royal Life
Harry and Will Won't Ever Be as Close as Before