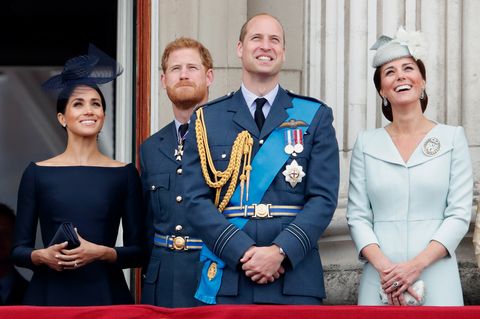 Royals: They're just like us. Proof: Prince William, Kate Middleton, Prince Harry, and Meghan Markle (collectively known as the "Fab Four" to those who follow the royals religiously), have a group text message and we've never been more jealous of anything in our lives.

The revelation comes courtesy of Us Weekly. A source told the magazine that the four young royals are "all on a family text chain."

Question: Have you ever wanted to be part of a group text more?

Answer: No. Of course not.

The Us Weekly source also addressed the rumors of a feud between sisters-in-law Kate and Meghan. As you might have already guessed, if you're a person who takes internet rumors that seem created just to stir up~drama~ with a very, very tiny grain of salt, there isn't one.

"There is no fighting going on between Kate and Meghan," the source told the magazine.

Apparently, the feud rumors (which Buckingham Palace has officially denied, by the way) are being fueled by the fact that Kate and Meghan are just very different women from very different worlds and those differences can look, from the outside, like standoffishness, but they aren't.

The Us source on Kate:

"Kate is lovely. She’s British, she’s reserved. You have to break through that armor. Kate doesn’t warm up to people too quickly. It takes some time for her to become comfortable and trusting for anyone in the outside world."

"It took some adjusting for Meghan to get used to the protocols of the palace and the royal family. That can’t be easy for anyone to get used to, especially a woman who had all the independence in the world just one year ago."

And on the state of the Duchesses' friendship:

"The 'feud' is definitely being played up. Are they the best of friends? No. Do they speak every waking second? No. Do they hate each other? Absolutely not. They are two women under serious amounts of pressure, stress and under a huge spotlight that no one can relate to—they will always have a bond that no one can break."

Welp, there you have it. Kate and Meghan have exactly the relationship that you'd expect two women from different backgrounds who find themselves suddenly related by marriage to have: One that's polite and friendly and a work-in-progress. Since there's nothing like texting reaction GIFs during important events to foster bonding, we're sure that group text is only going to bring them (and the rest of the Fab Four) closer.

Related Stories
Duchess Style: How Meghan & Kate's Looks Compare
Palace Makes Rare Move to Deny Duchess Feud Rumors
[H/T: Us Weekly]
Kayleigh Roberts Contributor Kayleigh Roberts is the weekend editor at Marie Claire, covering celebrity and entertainment news, from actual royals like Kate Middleton and Meghan Markle to Hollywood royalty, like Katie Holmes and Chrissy Teigen.
This content is created and maintained by a third party, and imported onto this page to help users provide their email addresses. You may be able to find more information about this and similar content at piano.io
Advertisement - Continue Reading Below
More From The Ultimate Guide to the Royal Family
The Queen's Corgis Are Helping Her With Her Grief
Charles is Looking Forward to Seeing Harry Again
Advertisement - Continue Reading Below
Will & Harry to Walk Together at Philip's Funeral
Prince Charles Addresses Prince Philip's Death
Prince William Pulls Out of 2021 BAFTA Appearances
Prince Philip Said He Had No Desire to Live to 100
The Queen Was by Prince Philip's Side When He Died
Prince Harry Is "Really Upset" Over Philip's Death
Will Harry & Meg Attend Prince Philip's Funeral?
The Queen Is Hopeful Prince Harry Will Return Home