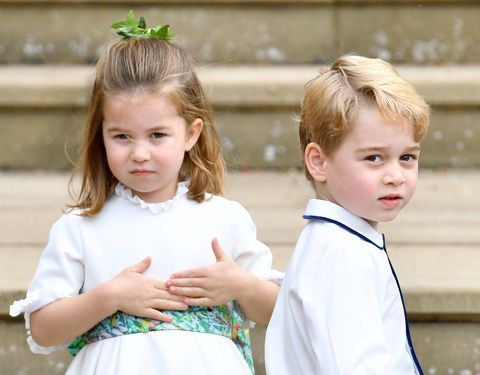 There is no "right" or "wrong" way to celebrate the holidays, but there are definitely traditions that are more common than others. When it comes to opening Christmas gifts, in particular, there are two main camps on the right time to exchange gifts: Christmas Eve gift-openers and Christmas morning gift-openers.

The royal family, for what it's worth, are Christmas Eve gift-openers. The Windsor clan famously exchange presents on Christmas Eve and opt for cheap gag gifts instead of expensive items.

Now, the upsides of Christmas Eve gift-opening are obvious. Not only do you get presents sooner, which is always fun, but you also get to sleep in on Christmas morning because you're not woken up by a burst of excited it's-FINALLY-time-to-open-presents energy (either from inside your own being or from a child who happens to be in the same house as you).

Prince George and Princess Charlotte apparently did not get the "you already opened your stuff so feel free to sleep in a bit" memo, however, because the little royals woke up at the crack of dawn—and woke their famous parents, Prince William and Kate Middleton, up too.

On the walk to Christmas morning church services in Sandringham, a fan asked the Cambridges how early they got up that morning and William was totally candid about their early day. "This morning was about 5 a.m.," he said, according to People.

When royal fan Jill Lee got a chance to talk to Kate briefly on the holiday, she said Kate confirmed that the kids were up bonkers early.

"I said to Kate, 'Were the children up early?' and she said, 'Very early, but it was lovely to see their faces,'" according to Hello!.

Since George, at least, has already been ratted out as a lover of opening gifts, maybe they were just hoping for more excitement? Or maybe Will and Kate and the kids secretly do Christmas morning celebrations as a nuclear family? Or maybe it's just a fact of life that kids everywhere, no matter what their traditions or royal/not-royal status, will wake up with the sun on Christmas morning. 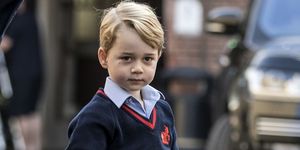 This Is the Name Prince George Will Go by at Schoo
Kate Middleton's Nickname for Princess Charlotte
Kayleigh Roberts Contributor Kayleigh Roberts is the weekend editor at Marie Claire, covering celebrity and entertainment news, from actual royals like Kate Middleton and Meghan Markle to Hollywood royalty, like Katie Holmes and Chrissy Teigen.
This content is created and maintained by a third party, and imported onto this page to help users provide their email addresses. You may be able to find more information about this and similar content at piano.io
Advertisement - Continue Reading Below
More From The Ultimate Guide to the Royal Family
How the Queen Ends Awkwardly-Long Handshakes
The Queen Has a Rule Against Bad Talking Family
Advertisement - Continue Reading Below
The Queen Took a Pic of Philip With Her to Funeral
The Queen's Tolerance Was the Key to Her Marriage
Will & Kate Welcomed Harry Back Into Their Group
Queen Left a Handwritten Note on Philip's Coffin
The Queen Said Grief Is the Price We Pay for Love
All of the Photos from Prince Philip's Funeral
The Queen Wore This Brooch to Philip's Funeral
Kate Middleton's Nod to Diana at Philip's Funeral