5
These Makeup Trends Will Dominate the Year
Getty Images

If you have a Bentley that you love and you just want to hang out with that beloved Bentley, enjoying it and basking in its Bentley glory, do not hang out with Khloé Kardashian.

As any true, long-term fan of Keeping Up With the Kardashians know that Khloé has a long history of annoying people who love their Bentleys. Now, the reality star is "annoying" a whole new generation of Bentley lovers—specifically, her own daughter, True Thompson.

A little history in case you need a refresher: Way back in the early days of Keeping Up With the Kardashians, Kim celebrated her newfound financial success by buying herself her dream car: a Bentley. She wanted to share her excitement with her sisters, so she brought Khloé and Kourtney along to pick up her tricked out ride. It took forever, Khloé and Kourtney got impatient and sassy with the guy who was keeping them all waiting on the car, Kim sided with the guy and all hell broke loose, culminating in lots of name-calling and Kim brutally attacking Khloé with her purse.

It's Season 2, episode 7, "Kardashian Civil War," if you want to go back and watch it on Hulu—which you should because it's glorious.

Flash-forward to 2018, when Khloé is back to annoying a Bentley-loving relative—albeit in a very different way this time. True got a bedazzled, pink Baby Bentley for Christmas and Khloé "annoyingly" showered her with attention while True just wanted to enjoy her car.

Khloé documented her annoying nagging of True for Instagram Stories, saying, "God, I am so annoying!!” She also joked that True would like her mom to "just shhh already."

As far as we know, True did not respond by later bludgeoning her mom with a Baby Birkin bag. 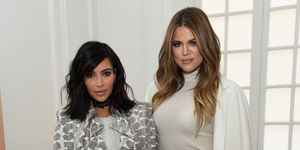