Today's Top Stories
1
Megan Thee Stallion Is Just Warming Up
2
One Nurse’s Week on the Coronavirus Frontlines
3
Sweatpants You Can Wear From the Couch to Brunch
4
'Killing Eve' Season 3 Review: What's Old Is New
5
Easy Ways to Look Better In Your Next Zoom Call
Getty Images

When it snows, most people put on more clothes than they were wearing before it snowed. In case you managed to forget, the Kardashians and Jenners are not most people. You can go ahead and add "posing in a barely-there bikini in the snow" to your list of things you'll have to do if you want to keep up with the Kardashians.

As of this writing, several members of the famous family have posed in almost no clothing in the snow. And not just a sprinkling of snow in the backyard—the sisters are posing on freezing cold mountains overlooking majestic views of snow-covered woods. Basically, imagine the most wintery setting you can and then imagine a Kardashian or Jenner, standing there, basically naked.

Kendall Jenner kicked off the current round of nearly-naked snow photo shoots on Sunday, when she posted a series of pictures of herself, standing in front of the most beautiful snowy landscape, wearing nothing but a pale pink bikini, fur hat, snow boots, and sunglasses. In the photos, Kendall holds a blue mug, presumably (or, at least for Kendall's sake, hopefully) full of a steaming hot beverage.

Kourtney didn't copy Kendall's look exactly. Her bikini was blue, instead of pink, and instead of a fur hat, she opted for an open puffy coat.

Of course, Kendall wasn't even the original KarJenner snow-poser. Kim iconically originated the concept (at least within the Kardashian family) in her 2015 "furkini" photo.

Kylie and Khloé have, so far, not participated in the nearly-naked snow picture trend. But hey, there’s time. 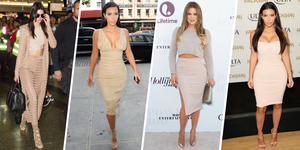