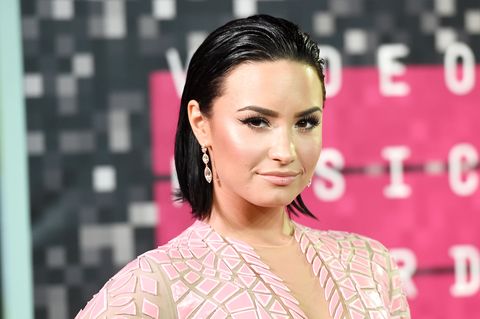 With literally millions of followers comes an amplified voice and, at the risk of sounding internet-y, a platform. Demi Lovato has never been one to hold back when it comes to using that platform to get the word out about the issues that matter to her. That's why, when the singer scrolled through her Instagram feed and came across a gross, fat-shaming ad, she spoke out.

The ad, for the game Game of Sultans, featured two female animated characters—one thin character described as "pretty," and another character who was, frankly just average sized, and was described as "obese."

Lovato took to her Instagram Story to vent about the ad, writing:

"Why is this fat shaming bullsh*t on my feed? So many things wrong with this ad. 1. You can be 'pretty' at any weight ... This is absolutely harmful to anyone who is easily influenced by societal pressures put on us from the diet culture to constantly be losing weight in a world that teaches us to equate our value and worth with the way we look and especially anyone in recovery from an eating disorder.

Please Instagram, keep this bullsh*t off mine and other's feeds who could be easily effected by this disgusting advertisement. With how aware people are becoming of mental health and mental illnesses, I expect you guys to know better by allowing this advertisement to be allowed on your app. And shame on the game."

Lovato also shared a screenshot of the offending ad on her Instagram Story and, yeah, it's definitely not good. Take a look for yourself:

In a statement released to E! News, the game company apologized, saying, "We're sorry. This ad was approved by mistake. We reviewed it again and removed it from future delivery in people's feeds." 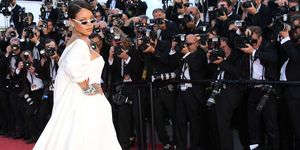 The Racialized Truth About Rihanna's Fat-Shaming
Kayleigh Roberts Contributor Kayleigh Roberts is the weekend editor at Marie Claire, covering celebrity and entertainment news, from actual royals like Kate Middleton and Meghan Markle to Hollywood royalty, like Katie Holmes and Chrissy Teigen.
Advertisement - Continue Reading Below
More From Celebrity
Dolly Parton, Icon, Started a Viral Meme
Kylie Threw Stormi the Most Elaborate Party
Advertisement - Continue Reading Below
Chrissy and John Had a Post-Grammys Dance Party
Selena Gomez Sent an Emotional Note to Demi Lovato
Nick Jonas Had Food In His Teeth at the Grammys
Why Isn't Beyonce at the 2020 Grammys?
Watch Demi Lovato's Emotional Grammys Performance
Beyoncé's Pre-Grammys Look
Blake and Gwen Were Too Cute at the Grammys
The Jonas Brothers' Grammys Performance Was a Lot