Close your eyes and picture the personification of "royal grace and sophistication." Did you picture Kate Middleton? Because that would be totally fair. The Duchess of Cambridge is, in many ways, the epitome of the royal ideal. While Prince Harry and Meghan Markle are out holding hands in public like heathens, Kate and her love, Prince William, are pretty royal classic when it comes to decorum and rule-following.

Turns out, however, that the royal family matriarch, Queen Elizabeth II, wasn't always so sure about Kate and her lifestyle choices. In fact, according to Express, royal expert and biographer Katie Nicholl said that the Queen expressed “grave concerns” about Kate back in the day, even going so far as to criticize Kate's "unpalatable" "frivolous displays of wealth."

Oh, and she thought it was kind of lazy and unbecoming that Kate didn't have a full-time job after college. According to Nicholl, the Queen, who was—and is—still one of the "hardest-working Royals, despite her age" felt like the fact that "a future member of the family was without a full-time job was unacceptable."

YIKES. Is anyone else curling up into fetal position on Kate's behalf right now? Because, to paraphrase the immortal words of Cher Horowitz, "Way harsh, Liz."

Kate was reportedly super hurt by the comments (which, duh), but was advised to "hold her tongue" because talking back to your future grandmother-in-law is never a great plan, but it's even worse when she's the Queen of England and legally has say over who your fiancé marries.

Apparently, the Queen thought Kate and her love of lavish holidays was a bad ~lewk~ for the royal family, considering the state of the British economy at the time.

Kate frolicking on a beach during a Queen Elizabeth-approved trip to Australia in 2014, but possibly thinking about Mustique.
Getty Images

"If Kate was not with William at Balmoral then the couple were skiing or holidaying on Mustique," Nicholl wrote of Will and Kate, according to Express. "Britain was now in recession and such frivolous displays of wealth were unpalatable to the Queen."

So how did Kate and the Queen mend the rift in their relationship? Apparently, the Queen "quietly suggested" that Kate start working with a charity and the future Duchess of Cambridge took the, um, advice to heart. She promptly got involved with Starlight, a charity that works with seriously and terminally ill children, and it seemed to do the trick because, these days, Kate and the Queen are all, "Feud? What feud?" 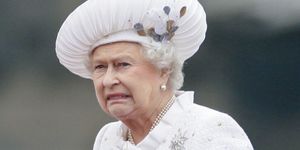 Why the Queen Hates K-Midd's Favorite Wedges
Kayleigh Roberts Contributor Kayleigh Roberts is the weekend editor at Marie Claire, covering celebrity and entertainment news, from actual royals like Kate Middleton and Meghan Markle to Hollywood royalty, like Katie Holmes and Chrissy Teigen.
This content is created and maintained by a third party, and imported onto this page to help users provide their email addresses. You may be able to find more information about this and similar content at piano.io
Advertisement - Continue Reading Below
More From The Ultimate Guide to the Royal Family
The Queen Is Apparently an Anti-Foodie
Harry Looked Regretful During Time 100 Interview
Advertisement - Continue Reading Below
The Queen's Dining Room Has a Secret Button
Meghan Could "Seriously Consider" Running for Prez
The Palace Just Subtly Shaded Prince Harry
Harry Plans to Fly Archie Around in a Helicopter
Harry & Meghan's Speaking Demands Could Cost Them
Will & Kate Skipped Harry's Birthday Zoom Call
Why Harry & Meghan Signed Their Netflix Deal
Jessica Mulroney Says Meghan Is Her "Family"