Lady Gaga and Bradley Cooper grew their reputation as "closest costars" at CAA’s pre-Oscars party on Friday night, where they reportedly spent their time talking "in a corner together all night," according to sources who spoke to Us Weekly.

The intimate, corner convo only fueled rumors that there are real-life romantic feelings between the costars, whose onscreen chemistry sizzled in A Star Is Born.

"They looked so close, they almost seem like a couple,” the source told Us Weekly of Cooper and Gaga's interaction at the party. Cooper's long-time girlfriend, Russian model Irina Shayk, with whom he shares a daughter, 23-month-old Lea De Seine, was not in attendance at the party. Lady Gaga's recent ex, Christian Carino, was however.

"Christian Carino walked into the party…said hi to Gaga at one point," the party source said. "But it was brief and then he went to another room."

Gaga and Carino's split is still very fresh; news that the former couple had decided to call off their engagement broke last week. 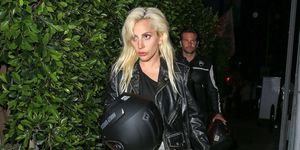 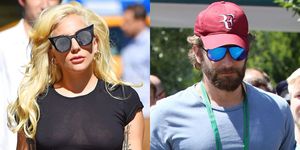 Lady Gaga and Bradley Cooper Grocery Shop Together
Kayleigh Roberts Contributor Kayleigh Roberts is the weekend editor at Marie Claire, covering celebrity and entertainment news, from actual royals like Kate Middleton and Meghan Markle to Hollywood royalty, like Katie Holmes and Chrissy Teigen.
This content is created and maintained by a third party, and imported onto this page to help users provide their email addresses. You may be able to find more information about this and similar content at piano.io
Advertisement - Continue Reading Below
More From Celebrity
Meghan Wins Copyright Claim Over Letter to Father
The Royals Wish Archie a Happy Second Birthday
Advertisement - Continue Reading Below
Charles Is Reportedly “Aggrieved” With Harry
Adele Stuns in Rare Birthday Photo Dump
Serena and Olympia Twinned in Swimsuits Again
Joe Jonas Opens Up About Parenting Daughter Willa
Kourtney & Travis Have Talked About Marriage
Meghan's Author Bio Includes the Sweetest Detail
46 Moments That Changed the Royal Family Forever
Chloe From 'Too Hot to Handle' Is in 'The Circle'