It's easy to forget this, but Prince Harry's reputation BMM (Before Meghan Markle) was much different than the public imagine he's had in his AMM (After Meghan Markle) life. Before he fell in love and started #adulting with Meghan, Harry was known as, well, first as a borderline Black Sheep (see: all of his cringe-y scandals from his late teens/early 20s) and then later as "the funny one."

Now that he's a husband and soon-to-be father, we also associate Harry with giving us collective warm fuzzies, but back in 2011, when Prince William and Kate Middleton tied the knot, Harry wasn't known for being serious. That might be why his sweet speech made such an impact.

"It was affectionate, warm and funny and touched William deeply," royal expert and biographer Katie Nicholl wrote in her 2017 book Harry: Life, Loss, and Love, adding that the speech made Kate shed a (presumably single and glistening) tear and his then-girlfriend Chelsy Davy get all smily. "When he said the couple’s decade-long romance was his inspiration, there was a shy smile from Chelsy, while Kate shed a tear."

Of course, Harry also included his signature humor—minus one comment that Chelsy (wisely) talked him out of making about Kate's body. Per Express:

"The speech was peppered with Harry’s classic sense of humor, and he ribbed his brother: 'William didn’t have a romantic bone in his body before he met Kate, so I knew it was serious when William suddenly started cooing down the phone at Kate.' Famous for his mimicry, Harry then impersonated his brother calling Kate 'Babykins,' to much laughter from the guests....[Chelsy] had helped Harry edit the best man’s speech, sensitively advising him to take out a line about Kate’s 'killer legs' that might have embarrassed the bride." 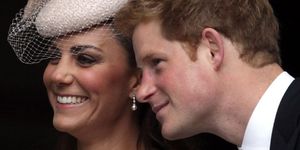 Prince Harry and Kate Middleton's Relationship
Kayleigh Roberts Contributor Kayleigh Roberts is the weekend editor at Marie Claire, covering celebrity and entertainment news, from actual royals like Kate Middleton and Meghan Markle to Hollywood royalty, like Katie Holmes and Chrissy Teigen.
This content is created and maintained by a third party, and imported onto this page to help users provide their email addresses. You may be able to find more information about this and similar content at piano.io
Advertisement - Continue Reading Below
More From The Ultimate Guide to the Royal Family
Shop Meghan's Stunning $30 Summer Dress
Duchess Kate Wears a Sleek Green Blazer
Advertisement - Continue Reading Below
Meghan & Harry Update Archewell Website
Will Is in the Dark About Sussex/Oprah Interview
Oprah Says Her Sussex Interview Is Her Best Ever
How Kristen Stewart Is Prepping to Play Diana
How to Make the Queen's Favorite Cocktail
The Queen Told Harry to Uphold His Family Values
Twitter Is Thirsting over Prince Harry
Your Guide to the Current Royal Line of Succession