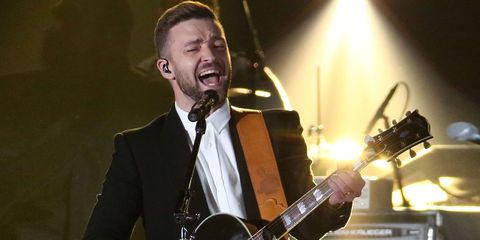 When it was announced that former *NSYNC member and "Suit and Tie" singer Justin Timberlake would take the stage at the 2015 Country Music Association Awards on Wednesday, there were some skeptics. But damn, did he just shut all of them down with this performance.

Justin took the stage with CMA Best New Artist winner Chris Stapleton, performing his hit "Tennessee Whiskey" before transitioning into Justin's "Drink You Away." And they pretty much stole the entire show.

Justin shared photos from the rehearsal earlier on his Instagram page.

Justin and his wife, Jessica Biel, enjoyed a fun date night at the event before he hit the stage.

Entertainment Weekly called the performance "an unapologetic display of abnormal levels of talent," which as perfect of a description of the duet as is possible.

Even Keith Urban was into it.

And so was Miranda Lambert.