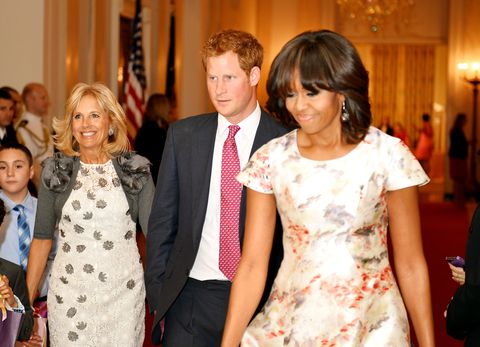 Prince Harry, man capable of growing beard in defiance of his grandma, will soon visit America, a nation that came to be because his ancestors weren't very good at their jobs.

Kensington Palace announced Tuesday that the 30-year-old will tour Washington, D.C. in late October to attend events connected to the Invictus Games, a worldwide sporting event for injured servicemen and women he helped found.

— The Duke and Duchess of Cambridge (@KensingtonRoyal) August 18, 2015

The event will take place in Orlando next spring, so maybe he's here this early to cut some ribbons and shake hands. At the same time, though, maybe he's *really* here on a secret mission to dethrone his brother as Head Royal Tourist.

Soon, Uncle Hawwy. SOON.
Getty
Chelsea Peng I'm Chelsea Peng, the assistant editor at MarieClaire.com.
This content is created and maintained by a third party, and imported onto this page to help users provide their email addresses. You may be able to find more information about this and similar content at piano.io
Advertisement - Continue Reading Below
More From Celebrity
Sam Asghari Opens Up About Britney Documentaries
Prince Harry’s Memoir Is Concerning Royal Insiders
Advertisement - Continue Reading Below
Meghan Markle Wore Some Familiar Earrings in NYC
Harry and Meghan Could Visit England for Christmas
Meghan Markle Looked Gorgeous at Global Citizen
Harry and Meghan Are Taping Their NYC Trip
Keep an Eye on Lady Louise Windsor
Princess Beatrice's Daughter May Get a Royal Title
James Middleton’s Wife Thought He Was a Waiter
Meghan Markle Got a New Nickname