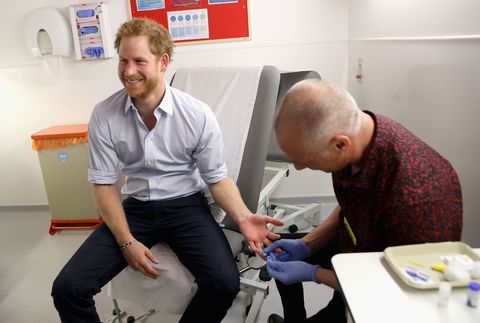 If you're looking for another reason to ship Prince Harry + yourself, he just helped destigmatize HIV testing by getting his blood drawn on Facebook Live.

In the below video, a visibly nervous Harry notes the importance of getting tested no matter your race, gender, or sexual orientation. "So, whether you're a man, woman, gay, straight, black, white, whatever, even ginger, why wouldn't you come in and have a test?" he says. "To normalize the situation, surely it's better that everyone goes and gets tested. Why wouldn't you?"

Harry's mother, Princess Diana, had a rich history of raising awareness about HIV, and a Royal Family spokesperson says Harry is eager to take up the mantle: "The Prince is now determined to help his generation understand that the battle against the disease has not yet been won and still needs fighting."

Not to be cheesy, but this is inspiring.