Grey’s Anatomy is celebrating its 300th episode—and during a celebration with the cast and crew, they also made a powerful statement. The show’s creator Shonda Rhimes took a knee in photos with many of the show’s stars, including Jesse Williams, Ellen Pompeo, Chandra Wilson, and Debbie Allen, and executive producer Betsy Beers. 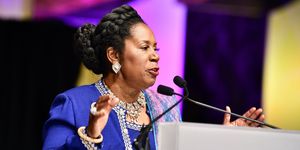 A Congresswoman Took a Knee on the House Floor

After President Trump unleashed an awful rant, calling for NFL owners to "fire the son of a bitch" because players like Colin Kapernick were kneeling during the national anthem to protest racial injustice, NFL teams all over the country—and members of Congress, too—have taken a knee in solidarity. And Rhimes and her cast are standing with them. 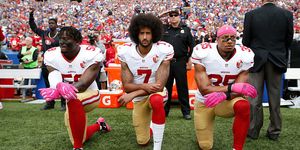 The moment came as the cast and crew were celebrating the Grey’s Anatomy milestone:

“We kneel because we are supposed to be one nation under God, indivisible, with liberty and justice for all,” Pompeo wrote on Instagram.

We kneel because we are supposed to be one nation under God, indivisible, with liberty and justice for all. #ilovethesepeople #300thepisode @therealdebbieallen @greysabc @shondarhimes @ijessewilliams

Rhimes added in her own picture that they were kneeling “in solidarity of racial justice:”

...and we took a knee in solidarity of racial justice. #takeaknee #greysanatomy #300th

Williams, who frequently speaks out about racial justice, noted, “Wherever I go, I’m me. This life is a ‘we’ thing.”

Advertisement - Continue Reading Below
More From Culture
Behold This Beyoncé-Inspired Gymnastics Routine
'The Bachelor' Has Already Finished His Season
Advertisement - Continue Reading Below
An Investigation Into the Next 'Bachelorette'
The Sexiest TV Scenes of All Time
Unmissable Horror Movies Coming Out This Year
Treat Yourself to a Chick Flick Tonight
Who Will Be on 'Bachelor in Paradise' in 2020?
Can We Talk About Kelly's Mom From Love Is Blind?
The Best Reactions to the 'Love Is Blind' Finale
Hilary Duff Hints About 'Lizzie McGuire' Reboot