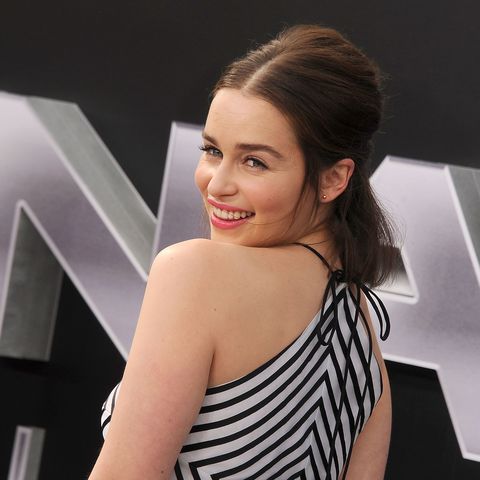 On Game of Thrones, she controls cities and dragons in Daenerys Targaryen's quest for the Iron Throne. Off screen, the actress has been fashionably traveling the world to promote her upcoming film, Terminator: Genesys, on crutches due to a hip injury. Literally, nothing can stop her.

Which is why we shouldn't be surprised that nude action scenes in Terminator didn't scare her, either."Naked in a harness was fun," the actress said during a press conference in L.A., reports People. "Doing stunts, that was good. That was interesting."

Thanks to many steamy Thrones scenes, Clarke has had ample opportunity to find comfort in her own on-screen nakedness. But when she stepped into the infamous shoes of Sarah Connor, the 28-year-old actress entered nude territory: Time traveling in her birthday suit. When you time hop, you can't wear any clothes (duh!), so Clarke strips down so she can levitate opposite costar Jai Courtney in the newest installment of the sci-fi franchise. Thanks to crafty camera angles, Clarke doesn't appear fully nude in the film ("I had a few things I tried to hide," she joked).

More than the nudity factor, Clarke says it was pulling off the film's insane stunts that tugged at her confidence. "In Game of Thrones I do a lot of delegating," she explained. "In this movie, I really have to get down and dirty and do a lot of the stunts and gun work and everything. There are similarities, but Sarah Conner is a whole other kind of badass."

This content is created and maintained by a third party, and imported onto this page to help users provide their email addresses. You may be able to find more information about this and similar content at piano.io
Advertisement - Continue Reading Below
More From Culture
Netflix's 'Selena' Cast vs. Real Life
It's Been a Weird Year for 'The Bachelorette'
Advertisement - Continue Reading Below
The 24 Best New Christmas Movies of 2020
Meet the Cast of Netflix's 'Virgin River'
Watch the Trailer for the New 'Euphoria' Special
Zac Clark Could Be a 'Bach' Frontrunner
This Guy Is a Frontrunner on 'The Bachelorette'
Will There Be a Season 3 of 'Virgin River'?
Unique Gifts for the Coffee Lover In Your Life
Want a Spooky Read? Order 'Plain Bad Heroines'