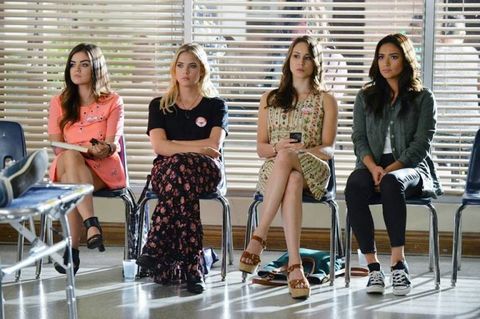 If you've been keeping up with Pretty Little Liars for the past five and a half seasons (or just the never-ending buzz about it), the show finally revealed the answer to its central mystery on last night's finale. And—spoiler alert—we now know that "A" is a character named Cece Drake.

The big revelation happened in the first 20 minutes of the episode, so the rest of the time is spent explaining why and how Cece became A. Apparently, she was born male—as Charles DiLaurentis, Jason's twin and Alison's older brother. Though the show never outright said she was transgender, it was implied, and the writers and actors confirmed the fact on Twitter after the show.

During the episode, Cece (then Charles in the scenes) is seen wearing dresses and wanting to be treated like a girl. Her mom is understanding, but her father isn't. Eventually, Cece is banished to a mental institution because her parents believed she posed a threat to her siblings (there's a flashback in which Cece places her sister in a bathtub full of water, which her parents think is an attempt to drown her)...but the other theory is that they might've locked her away because she's transgender. And that's just part of the problem with this plot.

PLL director Norman Buckley confirmed that he feels A is psychotic. She's tortured teenage girls for years, and killed a lot of people. This isn't sitting well with the show's millions of fans, who are disappointed that the "evil," screwed-up character is trans.

Fans quickly tweeted their disappointment at the show, especially since it has handled LGBT issues well in the past.

The villain in Pretty Little Liars was revealed to be a trans woman amounting to what's essentially a caricature of what people think of us.

#PrettyLittleLiars why did you make a trans woman the villain and display her transition in a negative way? UGHHHHHHHH

All jokes aside, #PrettyLittleLiars just dug itself a deep hole by villain-izing a trans character, and associating it with mental illness.

But that's not how the writers and the directors of the show meant for it to be interpreted—at least according to director Norman Buckley. Buckley is openly gay and has directed the incredibly powerful and positive LGBT storylines on The Fosters. He doesn't write for PLL, but he sees why the writers depicted A the way that they did. In a Twitter convo today, he defended the finale, while also admitting that it doesn't all make sense.

While Norman doesn't think the writer meant to imply that being transgender makes you psychotic or to contribute to that stereotype by making Cece A, that's how it was seen by a large portion of the audience. Even if they didn't mean for it to be interpreted that way, it's still disappointing to fans to finally see an actress on a popular TV show portraying a transgender character, only for that person to be the villain. Some are even saying that this might have been a quick—and ultimately, tacky—decision by the writers to capitalize on the fact that transgender topics are so relevant and in the news so much right now.

Elizabeth Denton I'm Liz, the fashion and beauty girl at Seventeen.com.
This content is created and maintained by a third party, and imported onto this page to help users provide their email addresses. You may be able to find more information about this and similar content at piano.io
Advertisement - Continue Reading Below
More From Culture
Fans Are Ready for Second Season of 'Bling Empire'
What We Know About Part 2 of 'Lupin'
Advertisement - Continue Reading Below
You *Need* to Follow the 'Bling Empire' Cast on IG
Watch the Trailer for the New 'Euphoria' Special
We've Getting a Season 2 of 'Bridgerton'
New Drama Movies That Promise to Move You
The Sexiest New Movies of the Year
A Look Back at Princess Anne's Life in Photos
Where Is the Cast of 'Gilmore Girls' Now?
'The Bachelor' Is Back!