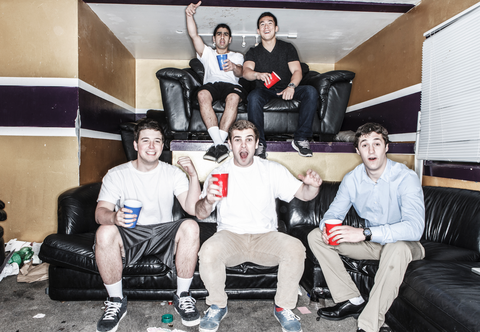 The Sigma Nu fraternity at the University of Central Florida has been suspended after members were caught on tape chanting about rape after coming home from a bar, the Orlando Sentinel reports.

A woman whose boyfriend lived in the same off-campus apartment caught the incident on tape, and then gave it to a UCF student to report to the school. "In a video, there's a brother yelling obscenities, like 'Let's rape some [expletives], rape some sluts' and then yelling, 'Rape' over and over again," the report at the Student Conduct Office reportedly reads. Just this October, a UCF student claimed she was raped at an off-campus Sigma Nu residence.

The video has launched a Title IX investigation at the school, and the fraternity is accused of condoning or encouraging acts of sexual misconduct. UCF will hold a hearing this week to investigate the fraternity members, who could face punishment ranging from community service to expulsion.

Here's the video, via Knight News:

The national office of the Sigma Nu fraternity condemned the student's actions in a statement. "We are deeply troubled by the allegations and immediately suspended the accused student, pending further developments," executive director Brad Beacham said. "The words used by people in the recordings are disrespectful, despicable, and vile."